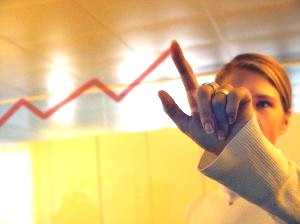 In a previous blog Venice wrote about her self-stock (How My Self-Stock Changes Over The Years) and made a lot of great points.  She spoke about her younger days and how she viewed herself, to how she changed over the years.  This blog came to fruition during a car ride when I was trying to explain to her that a guy in my position has no desire to ever cheat.  She understood, but I wanted her to really understand, so I came up with a self stock analogy to try and better explain myself.

When I was a younger I used to watch television and for whatever reason, spot a random woman from say…a shampoo commercial.  My eyes would fixate on how she washed her hair in the shower, showing parts of her body, and I would fantasize about the different things we would do together…nude…while rubbing her breasts on my face.  I didn’t need direct contact, I just needed a thought of her.  Those thoughts turned into dirty ideas, those dirty ideas took a life of their own.  Without the woman ever knowing me, she took advantage of me…in so many good ways.  In my mind, I came up with various scenarios, and as soon as my young body would orgasm, I no longer thought of the woman taking a shower washing her hair again… or until next time I saw the commercial.

At that time in my life, it didn’t matter if you were a random woman on a commercial that would never say a word to me, or a girl in my class that thought I was cute. Any woman, regardless of her self-stock, was a possibility for me.

As I got older, and held a girls hand, or smelled lotion on her skin, I needed more to a woman than just an image on a television screen.  I needed her to smell like a woman, I needed her hands to be soft, I needed to rub on her skin and hours later be able to smell her on me.  I could hold my hand to my face with one hand, and use my other hand to “imagine her body on top of mine.”

Yes, I meant jacking off.   It happened.

Again, I didn’t need much, but as I aged and got more experienced, I needed more from a woman.  I needed a woman that had more to offer, more self-stock.  Looks was also important, especially dealing with a woman’s stock. But looks meant nothing in the bedroom if her sexual skills and openness were so sub-par.

Eventually, most men get to the point where we can no longer be turned on by holding hands with a girl, or the smell of lotion left on our hands isn’t enough to satisfy our sexual urges (although holding hands and our woman’s scent will always be special).  We’ve experienced pulling down a woman’s panties for the first time and watching her shyly cover up her pubic hair. We’ve used our sexual energy to move her hand out of the way and slowly pry the girls legs open so we can see what she has been hiding from the world her whole life. We’ve stuck our heads between her thighs, felt her slightly try to close her legs again, embarrassed we won’t like the way it looks or smells, just to hold firm and lick the juices off her wet moist lips. We’ve guided her head down in our laps when she has told us she didn’t think she could every suck on a man’s penis. It seemed gross to her…to talk about, but when she was alone with you, she wanted so bad to put that hard thing between your legs in her mouth while you watch.  We almost look through her, scared ourselves we aren’t big enough, or our slight curve is going to gross them out, hiding our own embarrassment, and sit in awe as we see another person put their lips around our secret pride and joy.  What’s  unique about this paragraph is, as I type it, I realize some men put this phase in their life as the highest a woman’s stock can be.  The virgin.  Seeing a woman for the first time expose herself to a man.  Seeing a woman’s face the first time she feels a dick enter her body.  Seeing a woman, too embarrassed to make eye contact, going down on a guy and putting his dick in her mouth for the first time. Some men rate this self-stock, as the most valuable a woman can be (some religions give men virgins as a reward in heaven).  I do not.  Maybe I did at some point, but once a woman shows you what a high stock really is, the virgin can no longer satisfy your urges.  Much like watching a Life cereal television commercial as a young boy no longer leads to months of material and fantasies.

At this point in my life, if a woman grabs my dick, I can no longer appreciate not being deep throated.  In fact, in various threesomes, I would grab the back of the other woman’s head and shove my dick to the back of their throat until they gag or turn their heads away from my cock. Not in a mean aggressive way, but a persistent, I need more to get an erection while you suck my dick way.  Venice has set her self-stock so high, the average skill set can no longer excite me.   Having my head nicely licked, and the upper 1/3rd of my dick sucked on isn’t as appealing anymore.  I easily get bored and need more than what I had at 20 years old.  But it’s not just oral sex, it’s sex in general.  I’d consider Venice a 1%er.  I feel there is maybe 1% of the female population that will wake up each morning and give their husband oral sex, make sure every night he is satisfied or orgasms, whether it be long oil massages / hand jobs with happy endings, anal, vaginal, oral, or face fucking.  She has forced me to fuck other women, literally grabbing my dick and shoving it inside their pussies.  Or she holds the back of these womens’ heads and guides their mouths onto my dick while she talks dirty to them.  She is open minded to any weird out-of-the-ordinary scenario.  On top of that, she cooks dinner, works 2 jobs (one on the side), takes care of her family, and enjoys hanging out with her husband as much as possible.  She even will cut my hair and shave my body (no, I do not ask for this, she insists and sometimes makes me hop in the shower with her so she can groom me).  She likes making sure I look good.  I am not in the 1% of men of the world, in any category in my opinion.  Whether it be, dick size, patience, or doing the manly stuff around the house women swoon over.   In other words, my self-stock is much lower than hers.   Her self-stock is invaluable.

So, back to my original point.  Do you think I’d look at another woman, regardless if she was 20 years old and had the perfect body, and think anything other than, “I’m sure some men would enjoy the experience, but for me it would be a let down.  No way she is a 1%er.”  Venice has put her self-stock so high, that no reasonable person would sway or want to experience another woman behind her back.

I know that this is probably pretty annoying to read, a blog about how good my wife is to me.  But it’s the results of making your self-stock so high, that the man you are with has more confidence in you giving him a better experience than any other woman could.   Men are simple, and my self-stock analogy is a simple way to put the complexity of how a mature woman can satisfy a man in so many ways that the only thing a young girl can offer him that she can’t is…youth.  Which in sexual experiences, usually doesn’t mean much.