This past weekend I discovered a little series called “Game of Thrones.”  You may have heard of it.  I’ve only watched the first few episodes of it, but I wanted to share a simple lesson that I observed.  But first, some background.

Daenerys is the daughter of the last Targaryen king and ruler of the Seven Kingdoms, Aerys Targaryen.  When King Aerys is murdered, his two surviving children (and rightful heirs), Viserys and Daenerys, are exiled to safety.  Her brother, Viserys, conspires to have her marry Khal Drogo, a powerful warlord of the Dothraki people in order to obtain an army to defeat the current king of the Seven Kingdoms.  Daenerys has told him several times that she doesn’t want to be married to him, but he responds that he would let Khal Drogo, his men, and their horses fuck her if it meant that he would get his army and become rightful ruler.

Although he does not say a word during his first encounter with Daenerys, we learn a few important things about Khal Drogo.  We’re told that a Dothraki’s hair is cut off if he loses a battle, and see that he has arrived with his long hair tied back in a braid.  He does not arrive with a cavalry of men, just a handful behind him; he is clad only in pants and shoes, bearing a strong physique; they ride away acknowledging Daenerys with a glare, forcing her to question if he approves of her, which she is told “You would know if he didn’t.”  Soon after, the two are married: one, a privileged heiress to Seven Kingdoms, the other the leader of barbaric people who place great importance on horses.  During the wedding, the Dothraki’s simulate sexual acts instead of dancing and celebrate when a fight on the “dance floor” ends up in a disembowelment.  Daenerys is appalled.  During the course of the episode, Khal Drogo fucks his wife from behind several times, not wanting to face her or even let her talk.  To me, it symbolizes an extension of his power and dominance on the battlefield which is transferred to the bedroom. 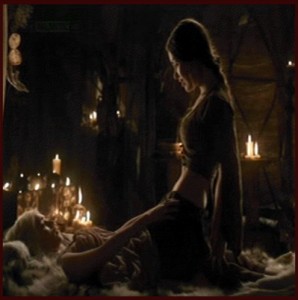 In season 1 episode 2 entitled “The Kingsroad,” Daenerys asks one of her handmaidens, Doreah, who was once a courtesan for Khal Drogo, to give her some tips on how to please her husband.  The scene is set it a warm, but dimly lit tent. (Daenerys is lying on the bed, Doreah is sitting on her looking down at her)
Doreah: No, Khaleesi, you must look him in the eyes always. Love comes in at the eyes.  It is said that Irogenia of Lys could finish a man with nothing but her eyes. (They lock fingers)
Daenerys: Finish a man? (she thinks about this) Oh.
Doreah: Kings traveled across the world for a night with Irogenia. magisters sold palaces, khals burned her enemies to just have her for a few hours.  They say a thousand men proposed to her and she refused them all.
Daenerys:  Well, she sounds like an interesting woman.  I don’t think the Drogo will like me on top.
Doreah:  You will make him like it, Khaleesi.  Men want what they’ve never had.  And the Dothraki take slaves like a hound takes a bitch.  Are you a slave, Khaleesi?
(Daenerys shakes her head.  Doreah places the queen’s hands on her hips and starts to grind on her majesty, showing her how to fuck from on top)
Doreah:  Then don’t make love like a slave.  (A look of hesitation is overcome by one of ferocity as she quickly changes places with Doreah).  Very good, Khaleesi. Out there he is the mighty Khal, but in this tent he belongs to you.
Daenerys:  I–I don’t think that this is the Dothraki way.
Doreah:  If he wanted the Dothraki way, why did he marry you? 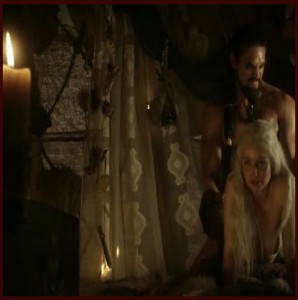 The scene changes to Daenerys lying in wait on a fur-line bed, candles burning everywhere.  Khal Drogo walks in with a look of confusion on his face as he makes a slight hesitation.  He immediately takes his place behind her.  “No,” she tells him firmly.  He pushes her onto her hands and knees.  She turns around and tells him, “Tonight I will look upon your face.”  She means business and will not submit to him.  He tries one last time to turn her over (although it was a feeble attempt), but she stands her ground.  She mounts him and begins to grind her man.  He grabs her breasts and caresses her ass.  He sits up and they begin to grind together; the whole while they are facing each other and staring into each other’s eyes.

Later we see Daenerys riding on a horse (in pants and boots) with her adopted people and orders them to stop.  She dismounts her horse and walks away from everyone’s sight.  Her brother, Viserys, rushes to her, puts his hands on her throat and says, “You do not command me! I am the ruler of the Seven Kingdoms! I don’t take orders from savages…or their sluts!” He is removed from his sister and asked if she wants him punished for disrespecting her.  Everyone turns to her to wait for her command. She tells them not to harm him.  At this point, she realizes the power she has as the Khaleesi.  The Dothroki look at each other and shrug, but obey her nonetheless.  Later we learn that Daenerys is two months pregnant, which changes the game even more significantly. From that point on, we don’t see the Khal taking her from behind anymore.  In fact, the next bedroom scene is of them two intertwined naked in bed and she reveals to him that she believes their unborn child is a boy.  Naturally, they are both elated.

Later, Viserys attacks his sister yet again because he is still under the impression that he owns her.  He hits her, but she quickly gets up and tells him that she is the queen wife of a powerful leader and that she carries his son, and pretty much tells him that if he raises his hands to her, it will be the last time he has hands.  We see her confidence growing all the while embracing her new culture by eating a heart and speaking to her people in the Dothraki language.  Clearly she is becoming more confident in her sexuality, her role as a wife, and losing her timidness.

A pivotal moment for the Khal came after Daenerys goes shopping in the marketplace with her suitors.  They come upon a man who has offered wine, but after he learns that she is the Dothraki queen, he attempts to give her poisoned wine instead.  He is captured and awaits his fate tied to a pole in a tent.  Khal Drogo enters the tent and immediately approaches his wife.  He is overcome with emotion at seeing his wife and unborn child unharmed.  Previously he told her that he didn’t see the need to conquer the Seven Kingdoms and that he didn’t need a throne to sit upon, but a horse.  But upon seeing her safe, he vowed that he would march his army so that his son may rule “where the father of his wife’s mother” ruled.

Face to face and in love

Her first step, asking Doreah how she can become a better wife and lover to the Kahl, didn’t win me over at that point.  I knew she was taking initiative, but I wasn’t fully convinced.  What won me over was when she told him that she wanted to face him during their love-making.  To me, the most important step is taking control in the bedroom.  Doreah was right: “Out there he is the mighty Khal, but in this tent he belongs to you.”  My husband has responsibilities at work and others who look to him for guidance (at work and play), but in our bedroom, I have the power over him.  I can determine whether or not he starts his day off right by the intensity of our morning intimacy time; I can decide if his last half of the day will drag or not by telling him that I want him to fuck me hard that night; I can choose how our night will end by the ferocity and method of our orgasms.  Once Daenerys realized just how much power she yielded over the most powerful man of their people, he became malleable, taking her side over his captains and second-in-command.  I came to this realization too, and it allowed me to interupt Ryan in the middle of whatever he is doing on his free time and ask him to give me the attention I deserve.  I didn’t have to suck his dick or flash my tits in my face, but my initiative and enthusiasm during our intimacy time keep him in a loving mood (and wrapped around my finger!)

The love story between Khal and Daenerys is one of my favorite in entertainment history simply because I see myself in Daenerys.  At first she is apprehensive to marry Khal Drago, even reluctant, because of her fear of the unknown.  I would even go so far as to say she thought she was better than the Dothraki, which contributed to her fear.  This apprehension, this fear, that we know about her (which is not much to go by) lets us think that she is prude, obnoxious, and will probably make an awful wife.  The worse I thought of her, the more dramatic her change became.  But the good thing is she can only get better.  Once she discovered her role as a wife, the Khal, in turn, discovered his role as a man.  The better she made him feel in bed (using her new-found confidence and sexual prowess), the more she became his.  Not as a thing of property or bartering the way Viserys treated her, but something of worth and in need of protecting.  She gave the Khal something that he never had: a wife, someone who would love him in and out of the bedroom, someone respected him out of love and not fear, and someone who was going to ensure his legacy – a child.  He became Daenerys’ personal bodyguard, someone he did not want hurt physically or emotionally.  His role as a protector became even more important because she made the decision to make her man happy in bed.

And for those of you who wanted to see a giant’s giant penis… introducing Hodor and his swinging telephone pole.  Hodor’s penis:

Also, we need more  of those amazing Hodor scenes.  Oscar worthy in my opinion.

One thought on “Relationship and Sex Lessons from “Game of Thrones””