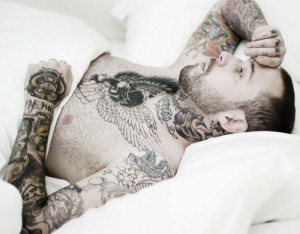 Yesterday while on twitter I made a comment about no longer wanting to have threesomes with Venice because I feel depressed afterwards. Although I have never tried to figure out the explanation behind this depression, I got a response from a twitter follower named @Verbal75 that used the term Top Drop. Venice and I had never heard of the term so I asked him to explain what it meant, and he did.  Although I am unsure if that is exactly what I am feeling regarding threesomes (that will be another blog), I have dealt with feeling depressed after having everyday vanilla sex with Venice.  Either way, as an introvert I was interested in the terminology and asked if @Verbal75 would like to write a blog about what he was trying to explain to me.   Amazingly, by the next day, I had this story in our inbox.

She was a fantastic partner and we had a lot of fun. After the scene was over we had previously negotiated the after care she had needed and I provided it with as much enthusiasm as I had for the whole of the scene previous. As it was one of my first scenes I really didn’t know what to expect for her needs over and above what we had previously discussed and simply did my best to listen as I had noted earlier this was one of my first. I left the party a time later elated and pleased with my new experiences and adventure.

The next day though, I felt awful. I’m prone to depressions in mood and one had set in hard. I was lethargic and it had seemed the colour had faded out of life. What had I done? Why am I feeling this way? Should I even do this again? The last one had me need to reach out to some fellow top friends and one female dominant knew what I was feeling right away.

“Sweetie,” she said on the phone after listening to how I felt even after the scene. “You have top drop!” She laughed a little after saying it but the sympathy remained. She mentioned that she had also had a very bad experience with drop after a scene. She told me to take care of myself and that it really was both OK and going to be OK. It was an important conversation for me as it reinforced my enjoyment of topping regardless of how I felt.

That’s where my exploration of top drop started but didn’t end. I contacted the woman who bottomed for me, touched base and ensured that I was a good top as well as ensured that she had a good time. It was nice to hear from her that both were positive and that she did not bare me any ill will but rather the opposite. That was something I needed to hear.

My female dominant friend and I had discussions later on where she asked me, “In your negotiations with bottoms when was the last time the bottom had asked you about your needs for aftercare?” I thought about it for some time. The answer was painful to give because it was, “Never, I have never been asked what my aftercare needs were.” Thinking I may have been a special case and since I’ve had only a small time experience I took the question to some bottoms as well as tops. The answers were unanimously the same. Never. This doesn’t make bottoms bad, not in the least. They are doing their job, They have their list of hard and soft limits. They are the ones on the right of the slash** and receiving the brunt of the scene. Their aftercare is damned important. And so is the top’s.

So, as a dominant, you need to determine your hard and soft limits as well as your needs for aftercare. This is just like what a bottom is expected to do. The submissive is in control of the submissive’s body and gives that to the dominant with the expectation that the limits and needs will be honoured. If limits are broken then consent is retracted and the scene is over, let the consequences fall where they may. But, that won’t happen so what is important is when you get to aftercare your needs are met. You get your hug, blow job, serious deep dicking, snuggles, conversation, cookie, water, silence or whatever it is that you determine you need. You may not get it right and suffer top drop again, that just means that you need to adjust your expectations for what you truly need.

Several of my friends started a group for local dominants to chat about our experiences in kink and this was one of the first topics that we chatted about at length. Each of us have a good story about it. We also joke that everything in kink revolves around communication. It was a blanket word but didn’t really help because we all know communication is important. So you have to break down the expectation of communication in each situation. Some of the best ice breakers or verbal grease are questions. What do I need? is too vague as provided your philosophical human rights “needs” are met you can pack up and go home. Otherwise, you’re going to get the stock answer of “I don’t know.” which while true is fucking frustrating to hear, especially from yourself. Here are some of that group’s delving into the needs of a dominant.

Change it up, “What do you want?” “Would you like a hug or other physical contact?” There is a lot to be said for the touch of someone you’re intimate with and kink is intimacy. “Would you like a cookie or chocolate?” kink and sex take a lot out of you if you are doing it right, even if you’re the one holding the paddle. Getting your blood sugar back up is good on many levels. Water and gatorade are also good to replace the minerals you probably have coating your skin. Plus, sharing food with your partner is yet another moment of intimacy.

I guess now is the time that I reveal I’m a very soft top. I’m more into sensation play like tickling, spanking, scratching, massage, and intimate touch. So, my needs for aftercare run along those kinks too. I like to be touched, massaged, and reassured. I like my kink a great deal and my experiences have been no less than extraordinary with the friends that I have made and the parties I have had the honour and pleasure of attending.

In conclusion, you have needs over and above your desires. It will do you well to consider them as well as acknowledging your feelings after the scene is over. Talking with those involved will help you all if you all approach it openly and honestly. These are fun times with consenting adults, there isn’t much better in life.

Ryan: Thanks @Verbal75 for the great article.   Although the terminology and the idea of aftercare is being used in the realm of BDSM, I find that in everyday vanilla sex with your spouse, as a man, I can experience the same depression described above.  If after sex Venice goes back to her normal activities, or doesn’t walk up to me after we shower and say something positive, depression can hit.  It may be guilt, or it may be the feeling of she really didn’t want to spend time with me but had to (pity sex), but without confirmation or care afterwards, the previous moment can be ruined. Although I hadn’t really put my finger on why I felt this guilt or depression, it does seem that aftercare is just as important in everyday sex as it is in the BDSM lifestyle, in my opinion. Maybe not for all men, but possibly men that are introverts.  Extroverts may not over think sex afterwards, while introverts over think everything.   As an extremely introverted person, not getting aftercare is almost equivalent to my wife purposely wanting to let me know she wants me guilty and is glad I can’t enjoy the moment she was forced to have with me.  As twisted as that sounds, an introvert can turn a simple miscommunication into something bigger than it is and  get really depressed.

Venice: We are constantly learning new things about our relationship and each other.  After hearing a brief explanation of Top Drop from @Verbal75, Ryan and I discussed why he sometimes gets depressed after sex.   Although it doesn’t fit nicely in any category (BDSM, threesomes, open lifestyle), the concept behind reaffirming a special moment is important. Sometimes I do turn off my sex switch very quickly. From screaming and clawing at the bed, to going back to working on something on my computer moments after we orgasm. There is no school for “How To Act After Sex University,” so I am still a work in progress.  In fact, there is no school for any of this.  Two strangers connect and try to live the rest of their lives together, happily. I didn’t know turning off the switch so quickly afterwards caused Ryan to feel depressed or guilty, but I do see how aftercare can be important.  I am good at hitting the switch and turning into a super woman in bed, but I am also very good at turning off the switch and going back to my every day self immediately.  Ryan needs a cool down period.  It sounds silly, but I don’t want him depressed after sex.  Aftercare, like foreplay, seems to be just as important to a good sex life.

I just came up with that, but it sounds right.

You see, sometimes the readers or followers on twitter end up helping us as a couple… the key is keeping an open mind.