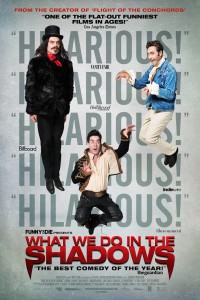 Although over the years my favorite movies will change, especially my number 1 spot, as of now here is a list of my top 10 comedies. The top movie tends to change according to what movie I can’t keep off loop and play daily. Enjoy and comment if we missed one of your favorites!

10) Tommy Boy – When Chris Farley was at his prime. It really didn’t get any better than that. Pure hilarity ensues as Tommy has finally had it up to “here” with Richard’s bitching and put-downs. They pull over to the side of the road and make fun of each other’s bodies – Tommy for being big and Richard for being small. It ends with a 2×4 to Tommy’s face and asking Richard if there was a visible mark “here, but not so much HERE…”

9) There’s Something About Mary – This movie is probably best for its sight gags: Ted’s gonads, Mary’s spiked bangs, and her neighbor’s “full frontal.” They’re great when you’re younger, but as I get older, they get old fast. At the time, though, I used the pause button a lot because my sense of humor just wasn’t developed. Still, this movie is, like “Tommy Boy,” a classic and have become ideal go-to movies if I feel like reliving my childhood.

8) Galaxy Quest – The Galaxy Quest cast are the stars of the huge convention held in its honor at the beginning of the movie, so this movie is clearly a play on the real life Trekkies. I’ve been to the San Diego Comic Convention several times, so I can really relate to the popularity of these types of gatherings. Once I got past the fact that the hugely successful Galaxy Quest stars are doing a ribbon cutting at an electronics supercenter the day after the convention (with only a dozen or so attendees releasing half as many balloons into the air), I really embraced the movie.
“That shit is soooo fake, Ryan. How the hell could they have thousands of fans packed in a convention center to see them, but only four people show up at the electronics ribbon cutting? SO…FAKE.”
“Ok, V. Is that where you draw your line? Aliens paterning their lives after a TV show on Earth, the actors defeating a race of evil aliens…are all realistic though?”
“Yes. That’s where I draw my line.” ::folding my arms over my chest and walking away::

7) Bridesmaids – I’ve been a bridesmaid before. Meh. Didn’t really count because I was 12. I was even a maid-of-honor. Again, didn’t count because I was out-of-state, and because of that I never realized just how cutthroat being in a wedding party can be until I watched this movie. I was a matron of honor and the wedding was beautiful and lavish. But not lavish to the point of having butterflies emerge from my invitations, it was more like…a can of peanuts with a note attached saying, “You’re ‘nuts’ if you miss this party!” Kind of. Watch this just to see Kristen Wiig’s face as she reluctantly munches on Jordan almonds.

6) The Fifth Element – A bit of a glamorized account of our distant future. Too glamorized. It’s like the “Waterworld” of space movies. I sincerely hope Chris Tucker is there coming at me live over the airwaves in my flying car. When Ryan and I first moved to our little townhouse to start college, this was the first movie I pulled out of our “Box o’movies.” None of our movies were alphabetized and this was something I had a sudden urge to watch. I played this movie over and over until it eventually got eaten by the VCR.

5) Kung Fu Hustle – With this kind of title you probably wouldn’t take this movie too seriously. It’s definitely a joke on the old kung fu movies they used to show on Saturday mornings when I was a kid. But the storyline is absolutely perfect. You get a hint that the “super heroes” are going to be something special since they’re all tenants living in the same ghetto. But they’re not. Haha! Ryan accidentally bought this movie twice. Here’s how:

4) The Princess Bride – My friend came over one Saturday and we made homemade carrot cake and pancit (Filipino noodles). We were in the seventh grade and we spent the whole morning chopping vegetables and making cake batter. We didn’t even start watching the movie until about 2:00 in the afternoon then spent the rest of the day saying, “Mawwiage…twue wove.”

3) Gentlemen Broncos – If you try to take this movie as a serious comedy, it will drive you crazy and you just won’t enjoy the subtle humor of a comedy that makes fun of being a comedy. I mistakenly did that: “This published author plagiarized THAT story idea?!?!” and “Nacho Libre’s sidekick is a celebrated director?!” Sam Rockwell, probably my all-time favorite actor, is in this movie, dual role. Look for it! So is Jemaine Clement, another favorite, which is why I’m including “Eagle vs. Shark” as a movie to tie for the third place spot. It’s an extremely awkward romantic comedy about a laid-off fast food worker and a manchild video game store worker training to face his childhood bully. A bit of an awkward twist when he finally faces off his bully, but you won’t help but cringe and laugh at the same time.

2) Shaun of the Dead – I’d classify this as a romantic comedy with a touch of zombies instead of the other way around. I’d even say it was even slightly a coming-of-age film. But seriously, as we see Shaun and Ed as a couple of grown kids playing video games and listening to classic electronic hip hop records early on, we know to expect the zombie-killing to be less-than-serious for the rest of the movie. As they gather their survivors together (Shaun, his mom, Ed, Shaun’s girlfriend (Liz), and LIz’s friends Claudia and David) they eventually run into their bizarro world survivors who, we assume, are just as dysfunctional in their own way.

1) What We Do In The Shadows – I found it very, very difficult to find a good comedy that I can watch over and over and over again. Then I found this movie. From the opening scene to the last line, I was laughing non-stop. There’s no huge plot build-up, no climax, no resolution. Just a a film crew filming a documentary on a couple of vampires living together in New Zealand who have several run-ins with their rivals – the normal, everyday Joe werewolves who aren’t allowed to curse. Why? Because they’re werewolves, not swearwolves.