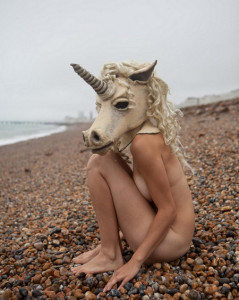 Now, do you want to know the narcissist twist in everything I just wrote?  I am more of a “unicorn” than any of the other women joining us in the bedroom.  If you don’t believe me, ask every husband that wishes he had a bisexual wife that had no desire for other men and would love to have threesomes, and even foursomes, with as many girls as possible…with him. Without jealousy and totally happy with same thing he is, having another vagina.  To him, I am the unicorn.

Does this also explains why Ryan won’t quit staring at me in the shower?!

In other words, the term “unicorn” is not set in stone and isn’t always used the same way.   I continued my research and tried to find various responses to the question, “What is a Unicorn?”

I’ve included these responses below and followed each with my own thoughts. Although technically we do not fit the mold of dealing with unicorns, I tried to relate each response to my own experiences:

(Response 1) In the swinging lifestyle lexicon, a unicorn is a single bi-sexual female who only plays with couples for money, rent, use of their vcr or whatever else it is they need.

This is an interesting take.  This person believes that a unicorn is someone who hooks up with a couple, but expects something in return.  Although for us, our goal would be to find someone that enjoys sex, our company, and a fun time, we have dealt with a similar situation. As soon as the other female showed signs that she was hinting at trying to use us, I was completely turned off.  Maybe I am selfish and expect people to hook up with each other because they find the others attractive, want to experiment, looking for experiences, and just want to have a good time?  However, when I saw the relationship becomes something more, like, “If you take help me with this, maybe I can come over Friday night and we can all hang out.”   We sent this so-called unicorn packing.

(Response 2) I have no idea, but if there are any unicorns out there, please be  free to message me or my spouse.

Hah.  Ok, ok. That answer didn’t help much.  I just thought it would be funny to include, because some people do not care what a unicorn is, they just want to get an extra woman in the bedroom so they can have fun.

(Response 3) A young, beautiful, single, bi-sexual female, who wants to move in with a married couple, have sex with both of them, do their dishes, babysit their kids, mow the lawn, and be totally subservient to both members of the married couple. Or something like that…..

A unicorn is young?  Beautiful?  Single?  Bisexual?  So what exactly do you call an older, not so beautiful woman in an open relationship that wants to play with a couple?  A horse?  Not sure I agree with this response.

Although most of the females who’ve been in our room have indeed been young, i.e. under 30. I assume this is because once they’re married, they need to have a husband who has agreed to be in an open relationship. Beautiful?  That’s extremely subjective. Single? How could you ever really know? We have played with a woman who was married and alleged that she was in an open relationship; claims like these are something that we cannot control. Although we were unsure, some things just didn’t add up. However, what can we do?  Should we give unicorns lie detector tests and see if they are really single, in open relationships,or flat out cheating?   If a woman lies and says she is single or that her husband allows her to fuck whoever she wants, we can never really know the truth, but in this lifestyle, anything is possible.  Similarly, being single can also mean not married, but still be in a relationship.  Bisexual? I would certainly hope so. If a woman decides to sleep with me and Ryan, I would hope that she is bisexual, and not just there for free dick and considering me, the female counterpart, as something she has to deal with because she’s not truly into women. As a bisexual woman, I don’t want to be the odd woman out in a threesome; I prefer to be the reason she is there. The rest of the statement (wanting to move in with a married couple, sex with both of them, chores, subservient) is hilarious. I’m sure there are young, beautiful, single, bisexual women out there dying to fuck a couple, then clean their home and look after their kids…then mow the law..and do their laundry…and scrub their toilets. Yea, right.

(Response 4) A unicorn can be older, but they are bi for sure, and will play with anyone, couples, singles, males whatever. They have no preference and don’t want to be in a relationship, or a poly. If they enter any relationship they are no longer unicorns.

This person’s response is a bit wishy-washy. Yes, of course a unicorn can be older. But again, age is relative. Willing to play with anyone (couples, singles, males, whatever)?  I’d think a unicorn may have sex with single men or women on the side, but that is not what makes them a unicorn.  That is just a single woman being single.  I’d say the woman is considered a unicorn only to couples, and not to a single man that just hooked up with her at a club.

(Response 5) A unicorn is a mythical beast with a horn.  It also refers to a pretty and otherwise dateable bi female who is willing to date a couple. A lot of women are sort of okay with poly, but only if “the man shares”, making it really hard for the guy to find someone. I mean, what are you supposed to say? “Wow, you look really interesting, can I bring you home to meet the wife?” Unicorns are easier to find in poly circles or swinging circles, but not MUCH easier; it’s hard enough to find a great girl to date when you are single, much less when you have a whole laundry list of added requirements.

I do find it funny that most people seem to say that to be a unicorn you must be pretty.  Being single, bisexual, available to a couple, and willing to clean their bathroom and mow their lawn doesn’t make you a unicorn, because if you are not pretty, you are just an ugly maid and yard girl that likes to fuck.  I am not sure I agree with that, but it is still funny.  It reminds me of a girl we had over  that Ryan and I wasn’t really clicking with.  She said something about being the center of attention and how we should kiss her from her toes all the way up to her neck.   Ryan rolled his eyes and mumbled something inaudible.   At that point she looked at Ryan and said, “I get what I want, I am the unicorn.”

Ryan looked at her for a moment, drunk, and responded, “You’ll get a horn in your face for sure, but that doesn’t make you a unicorn.”

That mythical creature didn’t work out so well.

So it seems to me that people have pretty askewed perceptions of what exactly a unicorn is. The reason why is because people have different expectations and requirements from the other woman. Not everyone wants to be exclusive to one “unicorn” just like not everyone wants to experience it only once. All couples have their own ideas about what a unicorn is, so once they find this mythical woman that perfectly fits their expectations, they discovered the holy grail.  Simply put, just like in real life, there is no such thing as a unicorn. The unicorn label has been put on women as a way to put them on a pedestal and for couples to say, “This is what we want. Where can we find her?”  And to some people, a unicorn does exist and it’s simply a girl, pretty or ugly, single or married, young or old, bisexual or not, that hops in the bed with a couple and fucks their brains out.