Someone on my Facebook liked this link and it showed up on my timeline. She has a good head on her shoulders and I respect a lot of the posts she likes. So it really bugged me to see this post that she liked because it’s entitled “7 Signs That It Doesn’t Get Better.”  For fun, Ryan and I have commented on each photo and title with our own opinion.  Enjoy. 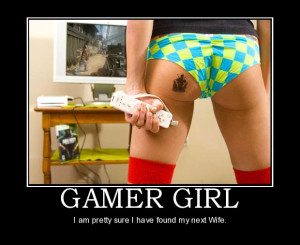 Venice: I will have to agree with this one only because relationships tend to be stronger when they have common hobbies, i.e. going to the gym, having the same collection, or gaming. However, note that there is a running joke about gamer girls being fat in the same sense that gamer guys are fat. Why? Probably because gaming in itself connotes a sedentary lifestyle. Which it does, but it’s just not as fun to be a hot gamer girl who is kickass at Dance Dance Revolution or Wii Fit. I like this picture – cute bootay, gamer, Call of Duty propped up nonchalantly in the background. However, she’s holding just the Wii remote controller when everybody knows you have to attach the nunchuk controller to play Call of Duty. Nice panties though.

Ryan: You definitely aren’t perfect if you are playing Call of Duty on the fucking Wii.  No offense, but does that even have multiplayer??!?! 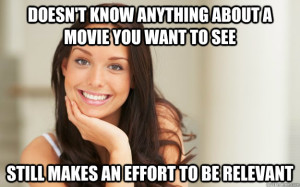 Venice: No, I didn’t misspell “let’s.” First clue you can’t take lists like this seriously. Although I admit, this is something that a lot of good wives/girlfriends do – instead of complaining that they don’t want to watch a movie, they’ll say, “OK, dear. I will watch ‘Happy Gilmore’ with you for the fifth time this week.” She knows that she’s racking up points for him to go shoe shopping or to pick up eggs and coffee at the grocery store on the way home. Smart.

Ryan: That’s cool you have no opinion on what movie you want to watch, I guess.  But I’d rather watch something we both want to see.  I don’t think not having an opinion is perfect or what I prefer.  I at least want to know what you want to watch so I can laugh at your suggestion of a romantic movie while we are watching Die Hard 20.  There is nothing wrong with having a mind and preferences. 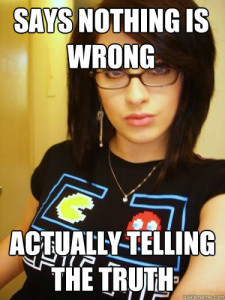 Venice: This is the one I agree with the most. If you have something on your mind, you should always say so. Open communication, bottom line.

Ryan: In theory Venice sounds great here, but trust me, there are times when she shuts down and I cannot tell if she is upset or mad.  I agree with this meme totally.  Please just say it if you are upset about something!  Open communication, bottom line. 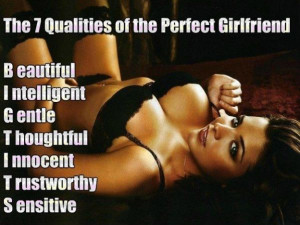 Venice: Let’s face it – this “meme” would be boring if it were just the words. So, bonus points for creativity to whoever the young man was that created this gem of a meme.

Ryan:  I didn’t even know Venice had titties when we met. I’m an eyes, lips, face, and personality type of guy.  I do like a nice ass.  I’m not mad at breasts, but they are the last thing I care about on a female. 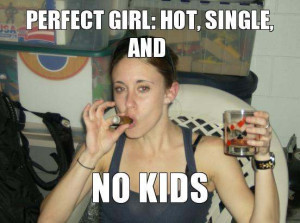 Venice: Guess what – the same thing goes for guys. What 18-year-old co-ed is out there saying, “I just left my parents’ home to start college. I want to go to clubs and have fun experien—ooh, who’s that guy with the sex dad-bod pushing the stroller?” No one, or at least close to no one. And this is the worse picture used, in my opinion. Hot? Sure. I can see the hotness in her if her mouth wasn’t wrapped around a stogie and holding an empty tumbler in her hand. Single? Maybe. No ring on her finger. No kids? I don’t know. Kind of hard to tell with the box of toys behind her plastic lawn chair. 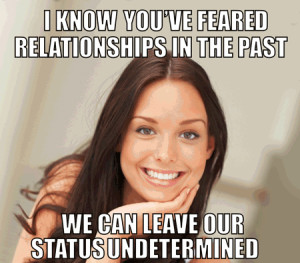 #6 “Status Undefined – if she doesn’t blast STATUS IN A RELATIONSHIP all over Facebook, you’re one lucky guy.”

Venice: I’m not quite sure what this means: is it saying that he would rather not let her friends and family know that she’s in a relationship? Shouldn’t the guy question that, like she’s ashamed of him or that he’s not good enough to be dating her? I don’t think his fear of being in a relationship has anything to do with Facebook status. If she’s not proud to say she’s dating you, I wouldn’t call myself lucky to be you or lucky to date you.

Ryan: If she isn’t changing her Facebook status because of you, you didn’t lay the pipe right.  Fact.  You’re her side dude. The guy she isn’t quite sure she wants her friends to know she is banging.   If that’s your goal, to be her little side dude that she isn’t claiming, I guess you can be okay with her not changing her Facebook status because of you.   Number 6 sucks. 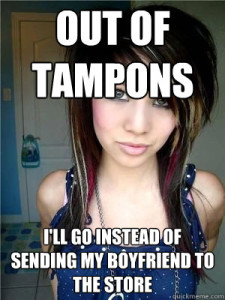 #7 “Doesn’t send you out for tampons – She’s independent and knows what embarrasses you. What else can you want.”

Venice: Don’t be so insecure about getting fucking tampons, young man. I can promise you the old lady ringing you up at the Piggly Wiggly is NOT giggling to herself and calling you someone’s little bitch. She’s probably praising you for taking one for the team (because your girlfriend certainly can’t leave the house, can she?) and risking ruining your reputation that you’ve build up in your head. Her independence is absolutely irrelevant. If you make your girlfriend leave the house with a wad of toilet paper between her legs, you’re a douche.

Ryan: This list must have been made by a 16 year old.  Who cares if she sends you out to get tampons? I used to send Venice out to get magnums, lube, and a pregnancy test once every few months, so if she returns the favor and has me go get tampons and stain remover, I am okay with that.

Venice: Alright, these are the signs in a woman that let you know that “it doesn’t get better.” High five to the boy who wrote these interesting little tidbits. I applaud the thought he put into it. I hope that instead of receiving author credits for this highly-informative editorial piece, he opted to receive Chuck E. Cheese tokens and a free kid’s meal at McDonald’s (his choice of nuggets or cheeseburger).