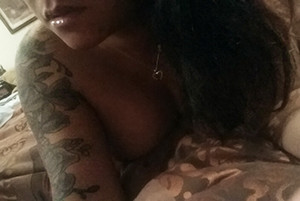 My excitement had been building exponentially as I planned to get a tattoo. Not a cute little heart on my wrist or a narwhal on my ass cheek. But something big, loud, and in-your-face. Ryan has told me many times that tattoos on a woman are hot, especially sleeves or legs. I had a tattoo before I met Ryan, but not in either of those places. So to hear him say that makes me say, “I love tattoos, and I want another one, so why not get it where my man wants it?”

However, Ryan is afraid of one thing: the stigma a tattoo of that size and location would bring upon me. I’m sure this thought has been on everyone’s mind who has ever had their bodies inked. Some things may even come to mind: trashy, dirty, uneducated bimbos. These thoughts have definitely crossed my mind at some point, even more so : I’m a college graduate, I served as a military officer and fought for my country, I kick ass at being the M in MILF, I make homemade meals at least three times a week (what? sometimes we have leftovers or Domino’s) and take care of my husband in every..single..way. It’s far too late to be ashamed of me. And if people choose to judge this book by her cover, then they are missing out on a caring, loyal, and selfless person.

He’s also said that if something happens to him and he passes away, he would be upset if he knew I was depressed, feeling lost in life, and unhappy because her wasn’t with me anymore.   Although he doesn’t like the idea of me being with someone else, he’d want to see me happy and our kids totally taken care of.  He’s afraid that a good man wouldn’t want to be with me because of my sleeve and tattoos. What he doesn’t realize is this: I have found my soulmate in him. I honestly believe that when we both die our spirits will find each other in the afterlife. Yea, I believe this. I have a literal and figurative connection with him that I am certain I will never feel with anyone else. I have his name on my body and our DNA co-mingle daily. I’ve dedicated my life and spirit to him. Forever. But, if in 20 years I want company in my golden years, and a man tells me, “I like you but I can’t really see myself loving you because of your tattoos.” Oh really? What’s next: telling me he likes me, but he can’t love me because I’m not a virgin anymore? I would rather die alone than settle for someone who loves only part of me, for someone who’d I’d be embarrassed to wear a tank top around.

Most importantly, my tattoos are reflection of me, just as my children are a part of me. I made conscious decisions to have them and I am proud of them. There’s always been a tiny voice in me sitting patiently, wanting to be more uninhibited and wanting to be someone who can beautiful and classy as well as filthy in the bedroom. I looked and felt beautiful even with no tattoos, but adding ink to my body was an absolute must. When I chose to reveal them in public, the ink spoke volumes about me. I have been more vocal about it in the past year or so after my sexual awakening. I say awakening because although I’d been hitting the snooze button, I’m up and out of the bed of life haha!. I’m no longer the quiet, prude, shy girl who was afraid of being embarrassed to do perverted things in bed; now, I’m not afraid to let loose, I’m not afraid to have a filthy mouth when I talk in bed; I’m more confident in the powers I have as a woman and a lover. I felt I deserved to have a body that matches my personality. I’ve learned to control and hone my sexual skills, now I want to do the same with my skin.

So with all that being said, to see pictures of models with tattoos Photoshopped on their bodies is laughable. I feel it’s a betrayal of a lifestyle. Not that saying that my lifestyle is any better, worse, or one that is above shame. But it’s 2015, and although having large, visible tattoos isn’t ready for mainstream acceptance, it’s still in its humble phase, similar to that of anal sex back in the 1970s. So why mislead the public like this? Perhaps it’s to promote a hidden agenda of running a social media website that worships these imaginary tatted women who are only skinny. Or maybe it’s a photographer who wants to bulk up his resume with specialty models? Or it could be that they simply think it looks better on an anorexic 20something?

I feel it’s probably one of the worst disservices to women in general. It’s disgraceful because when you see a tatted woman, you know there’s something extraordinary about her: she’s open-minded, she’s rebellious, she’s fearless, she not judgmental, and she’s probably freaky in bed. I added that last one because I speak from experience and it just takes a special kind of woman to alter her mind if she’s altering her body. Freaky in a more-than-missionary, lick your ass hole, let’s-anal-tonight, whistles-at-chicks kind of freaky. My markings are a badge of honor, and I’ve earned it through life experiences, not on-the-fly decisions; through meaningful discussions with my husband I’ve known almost half my life, not through walking by a strip mall tattoo shop and drunkenly saying, “Ooh, I want that! It’s so cute!!”

Lastly, it antagonizes real tattooed women. Why? Because we come in all shapes. Why try to project the lifestyle of a tatted woman onto a size zero model with immaculate skin whose job is to be eye candy for people who prefer a certain type of candy? One with no stripes, texture, and comes in traditional flavor? We’re more than just a Flash tattoo manipulated onto two-dimensional Google-searched images of “hot babes in bikinis.”

Note: We’re real women. No one airbrushed our curves out or our ink in. We wake up extra early in the morning because we don’t “wake up like this.” We work out before we start on dinner. We do our own nails. We cover up because the world isn’t ready to see our beautiful inked bodies at the office. We’re students, wives, mothers, teachers, nurses, lawyers, daycare teachers, military members. We’ve got filthy minds, we like our asses to be smacked by our men, and we like to be snuggled. We’re educated. We like to be told we’re beautiful. We like to look up new recipes and watch UFC. We can debate with you, then talk dirty as you take us from behind.

9 thoughts on “Tattooed Women: The Real and The Fake”