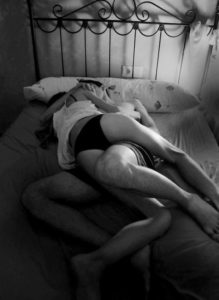 Although sexually transmitted infections (STIs/STDs) such as herpes, HPV, and pubic lice can be transmitted through non-penetrative genital-genital or genital-body sexual activity, non-penetrative sex may be used as a form of safer sex because it is less likely that body fluids (the main source of STI/STD transmission) will be exchanged during the activities, especially with regard to aspects that are exclusively non-penetrative.

Frottage is the general term for the act of rubbing any part of the body, including the buttocks, the breasts, abdomen, thighs, feet, hands, legs and sexual organs against the sexual organ of another person; this is done whether naked or clothed and is more commonly known as dry humping or dry sex. When frottage includes genital-genital rubbing, it is sometimes called genito-genital or GG rubbing.

In partnered manual genital stroking to reach orgasm or expanded orgasm, both people focus on creating and experiencing an orgasm in one person. Typically, one person lies down pant-less, while his or her partner sits alongside. The partner who is sitting uses his or her hands and fingers (typically with a lubricant) to slowly stroke the penis or clitoris and other genitals of the partner. Expanded orgasm as a mutual masturbation technique reportedly creates orgasm experiences more intense and extensive than what can be described as, or included in the definition of, a regular orgasm. It includes a range of sensations that include orgasms that are full-bodied, and orgasms that last from a few minutes to many hours. However, this technique is not without risk of contracting sexually transmitted infections, in particular HIV. A person using his or her finger, with a small wound, to stimulate a woman’s genitals could be infected with HIV found in her vagina’s fluids; likewise regarding a man’s semen containing HIV, which could infect a partner who has a small exposed wound on his or her skin.

Axillary intercourse: (slang: “bagpiping”, in reference to the underarm manner in which bagpipes are played; directing traffic, or pit-wank, a variant of the term tit-wank, are also terms for axillary intercourse). It is a sexual variant where the penis is inserted in the other person’s armpit.

Bundling: a courtship tradition in some Christian communities that was opposed by the religious right and has largely died out. The two young people were each in a sack tied up at the neck, and put in a bed together for the night.

Intercrural sex: when the penis is stimulated by placing it between another individual’s thighs. Lubrication may be used to allow the penis to move more freely between the thighs.

Kissing: the touching of one person’s lips against another person’s can be regarded as a sexual act, especially deep kissing (French kissing) where one person inserts his tongue into the partner’s mouth. Kissing may also be done on other parts of the body and is commonly a part of foreplay.

Stimulation of nipples: when one partner caresses (either manually or orally) the nipples of their partner. Any individual can participate in this act and it can be done in pairs or groups.