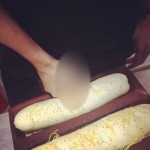 The new Subway 3 inch delux?  If  you are going to do a comparison photo, and your penis can barely cover an inch of bread, please do not use a foot long Subway.  Word of advice for Ian Jett, next time please use a tater tot for your comparison.

An employee at a Subway fast food chain in Columbus, Ohio, posted a picture of himself resting his penis on the restaurant’s sandwich bread to Instagram.

“My name is @ianjett and I will be your sandwich artist today,” read a caption that accompanied the not-suitable-for-work picture that appeared on Ian Jett’s feed.

When confronted about the picture, Jett tried to clarify his reason for sharing the image of his little penis over the foot-long bread roll.

“I would never do that at work — it was at home,” Jett told the Huffington Post. “This isn’t something I’d ever do at Subway. It was totally a joke.” — we do agree with this statement, his  penis is definitely a joke.

As if seeing a man’s micro penis resting atop the restaurant’s sandwich bread isn’t enough bad PR for a single news cycle, a second employee at the same Subway, Cameron Boggs,  also posted a picture of what he purported to be his own frozen urine.

“Today at I work I froze my pee,” Cameron Boggs wrote beneath the picture of a frosted-over water bottle half-filled with a yellowish substance.

Subway has fired both employees and released the following statement:  “This isolated incident is not representative of Subway Sandwich Artists,” the company said in a statement to the Daily News. “These actions are not tolerated and the franchisee took immediate action to terminate the two employees involved.”

One thought on “Subway Offers the New 3 inch Delux?”