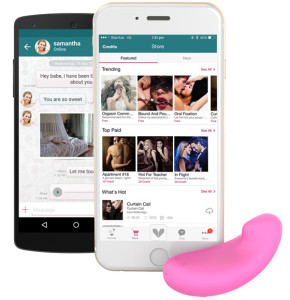 This style of sex toy (smart vibrators) is the future of long distance relationships. To be able to watch the person you are in a relationship with via Skype or Facetime and see how they react to the vibrator settings you control, while at the same time letting her watch you stroke yourself, is probably as close to real sex as a couple can get when they are 100/1000s miles apart.  It’s not just for long distance relationships though, as Ryan and I have used it while both of us were at work until the batteries ran out. It made a long boring workday much more exciting to say the least. 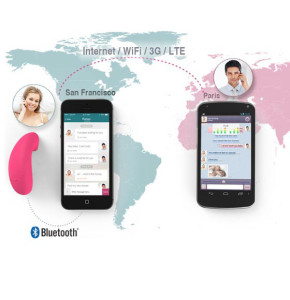 Connectivity. This isn’t some media spill I was given to type. This is my own experience with the product. I had no connection issues with Ryan. He literally changed my settings throughout Vibease’s battery life at work and as long as I was logged into my Vibease app, I could feel all the changes he made. To confirm this, each time I felt it change, I would send a text and ask what the new setting was called.  Each setting (configurable)  has it’s own name, so we’d laugh and I’d rename them more accordingly to how it felt to me.  For instance, the “Soft Lick” became “The Dying Battery” and the “Shooting Star” became “Ryan Drunk As Hell Trying To Eat Me Out”.  This became almost like a game for us throughout our experience. It was fun. A good connection is probably the most important thing when it comes to an item like this. As long as you have a compatible phone (almost all smart phones), regardless of distance, you can control all the sensations the person feels, without being disconnected or having to stop playing and fix your Bluetooth settings. 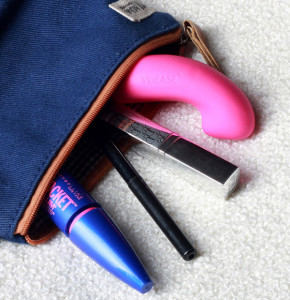 It’s quiet. In fact, it’s so quiet that I have to turn everything off in the room and force myself to separate the white noise of my computer fan from the vibrator sound. I’d go as far to say that it’s undetectable in an office setting. Being that Ryan and I do everything together, I used the Vibease while I was working in my office.  I was able to walk around, attend a conference, and meet with customers all while my panties and clitoris were having a party below. Not that I can explain to anyone why my eyes kept rolling back into my head, but the risk is worth the reward in my opinion.  It’s just too bad I didn’t really get any work done.

It’s waterproof. This is just a feature I read in the media spill that I felt was still worth mentioning. Although I haven’t put it underwater and tested it, I assume Vibease claiming it’s waterproof means it’s waterproof. Although this feature isn’t something you can use with your panties and clothing on 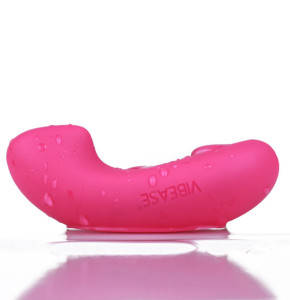 (you may also not want to dip your phone in the water either, unless your phone is waterproof), it’s still a good feature for possible remote play with a friend while you are in the bathtub. A possible idea for someone a bit braver than me that really wants to test how “waterproof” the Vibease is: hold the vibrator up to your body while taking a bubble bath, have your lover on the phone telling you a dirty story, and let him/her have total control of the different sensations the app can provide. I assume the Bluetooth functionality will still work flawlessly underwater, but since I haven’t tried it, you will have to experiment on your own. 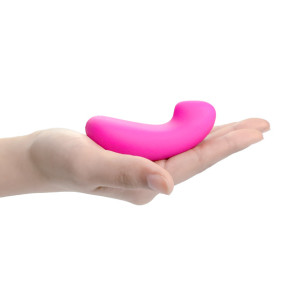 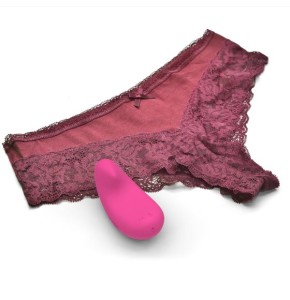 The price is right! Probably one of the lowest priced vibrating items we have reviewed in the last few months. Anything that can give you a thrill for under $100, is worth the experience. There really isn’t a better bang for your buck. Pun intended.

We started playing with the Vibease fully charged at 9:54 A.M.  We decided to leave it on and see how long the battery would last. The battery life was gone by 11:15 A.M.(switching from different settings and pulsations the entire time). Being that we are unfamiliar with the typical battery life of wireless vibrators, I will let you judge for yourself. Obviously, we’d like this thing to last a whole 8 hour work day, but I do not think that will ever be possible.

We are not affiliated with Vibease and get no revenue from this review.  Our goal isn’t to make money promoting things in hopes you buy it, rather we are just sharing our reviews on products we have tried and want to share with our readers. We review items we buy ourselves or get sent to us as promotional products.   All reviews are just our opinions and experiences.