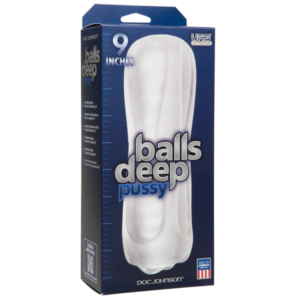 This story is a bit funny because recently we’ve reached out to a few companies with media inquiries regarding their products.  Our goal was to get more content for our review section.  Of course we start contacting companies we considered to be the most popular, Doc Johnson easily in the top 3.   With that being said, we sent the public relations department an email and told them a little about our website and past reviews.  Within a few hours we received a response.  Little did we know, we had already reviewed a product of theirs: Realistic Vagina – The Pocket Pussy.  The email response had the following quoted:

So, Venice and I have found the worst sex toy ever.  The pocket pussy. What started off as a simple curiosity, turned into me experiencing the midget’s version of a Fleshlight.  Worst toy ever.

Yea, so pretty much, not a great start.  However, in The Pocket Pussy’s defense, those quotes were from our original review, which we had edited a few months later when I revisited the sleeve on my own one night (self snitching).  Originally I was using The Pocket Pussy like a Fleshlight, which meant I was leaving it inside the container it’s stored in.  Because of the small size, that absolutely didn’t work.  After I took it out of the hard container and used it as a sleeve (holding the soft material in my hand), I rewrote the review in a more positive light and turned the old review into a quote. However, we’d look like jackasses explaining that to the Doc Johnson’s public relation person, so we just left things how they were and took the L(oss).   There is no way we were going to admit to being sex toy inept.

So we marked Doc Johnson off our list and started looking for less popular companies maybe we haven’t already given bad reviews to, such as, “Big Silly Willies Trailer Park Toys — we also make silicone beer holders!“

A few weeks later we get a box in the mail from Doc Johnson.  How did I know it was from Doc Johnson? Because every corner of the box was taped up with large writing that said Doc Johnson all over it.

So yea, our mailman knows what’s up now.

Not really sure what was inside it, I held the box up to my ear and listened for a ticking sound, just to make sure it wasn’t some sort of time bomb or explosive vagina device.  You never know, our review of their Pocket Pussy was pretty harsh.

I opened the box and to our surprise, Doc Johnson had sent us a bunch of random goodies (which we will review some of them at a later date).  Yay!  No exploding vaginas!

The biggest goody, which made us both laugh, was the Balls Deep 9″ Stroker Pussy.  Apparently the Doc Johnson staff has a sense of humor and wanted to make sure that the mistakes we made with the tiny Pocket Pussy didn’t happen again.   One thing is for sure, I am not filling up a 9 Inch Stroker Pussy.  Not even on my best day.

Before I get started, I’m warning you now, I am going to mention the Fleshlight a lot.  Why?  Because the Fleshlight is the first experience I’ve had with a stroker and although I haven’t tried it in years (or tried any of the new shapes and textures), it makes reviewing this product easier for me to relate it to you, the reader.  If you have never tried a Fleshlight and you can’t relate to my comparisons, then I just saved you 60 dollars.  You’re welcome.  Buy the Balls Deep 9″ Stroker Pussy and you’ll be set. 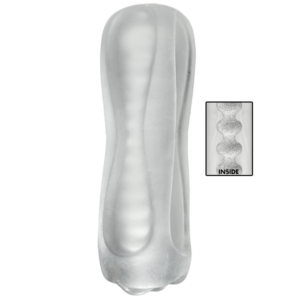 So let’s get to the stroker. It’s definitely 9 inches. No false advertising there.  It is also transparent so you can see your penis inside it as it…well, moves in and out and has sex with a transparent robo-like vagina thingy.  Neat, but humbling. Why humbling?  Lets just say knowing you can’t “hit the back” of your sex toy isn’t the greatest feeling in the world.  Just seeing the extra inch (I’m probably lying, it could have been more) is almost like a challenge… 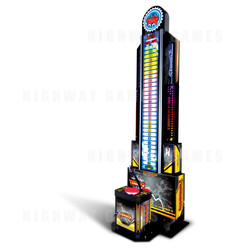 Like being at the carnival and using the hammer machine, where the harder you hit it the higher the puck goes.  The highest says, “Oh my God,  Super Man!  You are the man and everyone else sucks!  Stronger than an Ox.”  Right below it says, “You’re kind of strong, but not nearly as strong as one inch higher, weakling.”  So yea, I don’t really enjoy a sex toy mocking me.  Just saying…

I’d be a bit shy to use it while Venice watched, simply because as a alpha man (grunts), I want to really fill up whatever my dick enters (fact).  On the plus side, it is extremely tight.  In fact, it is so tight it left my penis feeling worn and warm from all the friction for hours afterward.   Because of the texture inside, the ridges (massage beads), as you stroke in and out, those ridges create a mini suction every inch or so.  I’d assume every inch means there are 9 ridges total, but I probably only felt 7 or 8.

Anyway, the suction feels amazing.   In comparison, I have only used the original untextured Fleshlight, so the 9″ Stroker  feels much better than the Fleshlight I’ve tried. Truthfully, I don’t think I’ve felt any stroker with this much texture on the inside.  It was a total new experience and I enjoyed it thoroughly.

Also, the Balls Deep 9″ Stroker isn’t sticky (insert old semen joke here). The biggest problem I had with the Fleshlight was the fact the material was so sticky.   For instance, if I touched my finger on it, it would stick to my finger like it had glue on it.  Adding lube made this sticky texture very slick, but I personally hated how it felt cleaning it. The 9″ Stoker doesn’t have this problem. It isn’t sticky, it doesn’t stick to your fingers, and the clean up is very easy. 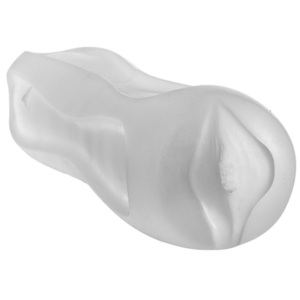 However, at times, if I pulled out too far, I’d have to grab my dick right underneath the head and carefully guide it back inside the small opening.  Because of the hole size, the lack of stability with it just being a large soft sleeve, and the width of my penis (average but still very alpha), it wouldn’t easily slide back in.  Unlike a real pussy, I can pull out, let my entire dick feel the cool air, including my head, then slide it back into the woman’s body with no hands.  Obviously a woman’s body is stable and stationary and will not wiggle (most of the time) as you guide your penis back into her.  I can do this with the Fleshlight, but the Fleshlight isn’t nearly as tight.  So the pros to being a bit looser is you can somewhat slide the stroker off and on much easier, yet you do not have the tight sensation that most of us men love.  The Fleshlight also has a harder outer shell that the sleeve rests in so the entrance is much more stable (no wiggle).

With that being said, I still am not big on strokers in general.  I used the Balls Deep 9″ Stroker for about 30 minutes and kind of edged myself so I didn’t orgasm.  I could have, but I really used the stroker to turn myself on.  The urge to just put the toy over to the side and get Venice was too much.  So I ended up cleaning off the lube and using her Balls Deep 8″ Throat instead.  If I do use the Balls Deep 9″ Stroker in the future, I will try to find a way for Venice to hold it or place it inside a pillow so I can fuck it while she kisses on my neck and talks dirty to me.  These strokers try to mimic how the vagina feels. And although I agree, it feels way better than a hand, if I am jacking off, my brain wants to feel my hand.  And every now and then, I need this sensation.  If I am having sex, I want to feel the texture of a vagina.  If I use a stroker, I’d want to place the stroker stationary and fuck it like I would a vagina. Preferably while I eat real pussy.  That’s just my preference.

Give the Balls Deep 9″ Stroker a study shell so you can place it in a sex cushion and it would probably be my favorite toy.  It’s texture and suction felt amazing.

Description:
Doc Johnson Balls Deep 9 inches  Stroker Pussy. Fully commit to this extra long Pussy. Featuring stimulating massage beads on the inside for intense satisfaction with a closed end design for extra suction. Made of UR3, the most lifelike material in the world, this stroker is a happy ending every time! Phthalate free, body safe. Proudly, made in America.

We are not affiliated with Doc Johnson and get no revenue from this review.  Our goal isn’t to make money promoting things in hopes you buy it, rather we are just sharing our reviews on products we have tried and want to share with our readers. We review items we buy ourselves or get sent to us as promotional products.   All reviews are just our opinions and experiences.