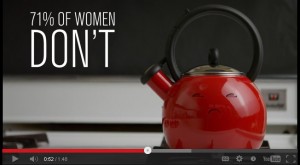 Ryan:
I am going to go out on a limb here and say this claim is just outright false.  Statistics, studies, or whatever else you can come up to back up this claim is utter nonsense.  This fact was used in this video to almost subliminally advertise and go viral.  Facts like this make every man on earth automatically want to hit the “share” button and show their significant other how unaverage they really are.  Husbands immediately forwarded this video to their wives, wives immediately forwarded this video to their boyfriends, and boyfriends immediately forwarded to their boyfriends.  3 minutes?   30% of men have reported problems with premature ejaculation at some point in their life, and the average time for most men is 4-8 minutes.  Of course this is also a bit short, but to put the absolute minimum and then take off another minute was done on purpose to create a buzz.

Video claim:   6% of women regularly squirt, 30% of women swallow their partners semen, and 11.5% of women have had same sex relationships.

Venice:
I’d say the percentage of unshaved women age 20-45 is much lower.   The same can be said for the men.