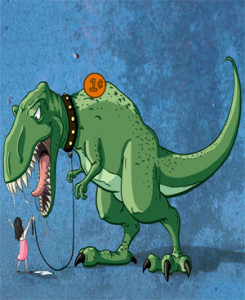 When I first met  Ryan  we would baby talk, and if he ever got upset he would storm off and sit in a corner and pout.  It was cute, especially since we were newly married.  Well, one day he was upset about something that was probably very stupid and said, “Fine then,” and went and sat in his pout corner.

I was being lazy and didn’t really want to get up and play concerned mother while I grab his sad face and lay his head on my breasts and say, “Oh, baby, it’s okay, Momma is sorry.”   This was our first apartment so it was small and a bit muggy.  Ryan had his shirt off and was sitting in the corner with his head down making sniffling sounds.  I picked up a penny off the table and tossed it across the room at him and said, “Come on Ryan, Momma is sorry. Come here and give me a hug.”   After I threw the penny, I noticed it stuck, dead center of his back.  It literally stuck to his skin, right between both of his shoulder blades.  I immediately began to laugh.  Of course, this irritated Ryan as he couldn’t really pout and be sad with me behind him laughing so he slung his arms around from side to side like a little child, trying to scratch the penny off his back.  It was impossible because it was in the exact area where his hands could not reach.   The harder he tried, the more I laughed.   Ryan looked like a T-Rex trying to pull a dragonfly off its back.  This went on for what seemed like minutes.

Eventually he stood up and looked at me and said.  “It’s not funny, I’m sad and this stupid fucking penny you threw at me is stuck to my fucking back.”   He jumped up and down over and over and nothing happened.  Again I laughed.  He stubbornly walked over to the corner of a door and rubbed his back up and down until finally the penny dropped to the floor.  He reached down and grabbed the penny, and threw it on the carpet in front of me.  As he stomped past  me he said, “This is going to cost you big time, I’m not going to accept your apology ever!”  He then stormed to our single bedroom and slammed the door as hard as he could.

I finally got up and walked over to the door and said, “Baby, I’m sorry, what’s it going to cost me to get you to accept my apology?”  I paused and listened to him shuffle around.  I then added, “A penny?”

I slept on the couch that night.