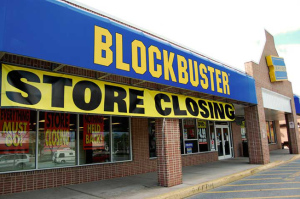 This morning we were talking about the last Blockbuster employee, probably in denial that he no longer had a job or the Blockbuster hook up.

Venice: I bet the last employee of Blockbuster had a Jerry Maguire moment.

Ryan: I like it.  A movie reference when talking about the last Blockbuster store.

Venice: I’m serious.  I bet he stood up on one of the empty shelves that used to hold DVDs and announced that although Blockbuster Movies LLC was no longer going to pay him a salary, he would continue running the store on his own.

Ryan:  He probably fell off the shelf a few times before he could get the whole announcement out though.  Literally, those shelves are about 3 inches in depth and unless he had small feet…

Venice: …Oh no, he has huge fat feet for sure.  However, over the years he has learned how to balance himself while walking the shelves for fun on the slow Bargain Tuesday nights.

Ryan: “Listen everyone.  <pushes up his glasses>  I have exactly 462 movies if you count my old VCR and BETAMAX tapes.  If we pull together we can all join forces and stock at least 3 of these shelves.  Who is with me?”

Venice: He is going to bring all new ideas to the table, like the idea of renting one VCR tape and you get to bring home the actual cover as well.  Not the blue box with the words “Blockbuster” on it.  He understands people, and like him, we all enjoy reading the back of the box while we watch the movie.

Ryan: I mean, that’s part of the whole experience.

Venice: Yes, but when it’s returned, if he finds any creases or frayed corners that were not there originally, he will charge a 50 cent repair fee.

Ryan: Or you can buy video cover insurance for 25 cents a day to protect yourself from any possible damages that may occur to the cover.

Ryan: How about the handmade “Please Be Kind and Rewind” sign.

Venice: Yea, except he understands that rewinding too far is a burden.  The tape must be rewound to the beginning of the movie, but after the advertisements and FBI warning.

Ryan: Ah yes.  And when you return it, he puts all tapes in the store VCR during your check out to make sure you and everyone else in line can see exactly where you left the video. The purpose is to shame the customer and teach them that apparently they are not kind if they did not rewind.  If the video does not start after the advertisements and FBI warning, they will be charged a rewind fee and be banned from all future VCR tapes released from 1980 – 1998. Any video released prior is still available, except for Star Wars and Rocky, since they will not be in high demand.

Venice: His favorite movies will cost the most to rent.  The release dates mean nothing. Star Trek costs 100 dollars to rent, even on Bargain Tuesdays.

Ryan: He will also have a Redbox kiosk behind the counter that only he has access to.  He will be the only person allowed to use this Kiosk, but you can order any new (non VCR) video through him.  He will purchase the video from the Kiosk himself for $1.20 and mark up your rental fees to  $4.00.

Ryan: He will also have a Coke machine and a Lays vending machine, all stocked by other companies weekly, behind the counter, so only he can get to them.  If you want drinks or snacks, he will purchase them for you and mark up all costs.  This kiosk idea keeps his costs down, no stocking fees (for him), other companies keeping the Kiosks up to date and making their own profit, while he just uses the machines to provide a place for customers to shop.

Venice: Yea, but no stocking fee?

Ryan: Not for him, no.  But for the customer?  Absolutely.   Anytime he has to slide the Redbox case back into the machine is an automatic 15 cent stocking fee.

Venice: It’s really a shame that management didn’t at least make Benjamin co-assistant store manager.  He obviously was an untapped talent resource for the company and could have probably saved the Blockbuster from dissolving.

Ryan: It’s hard to see a diamond in the coal until it has a chance to shine.