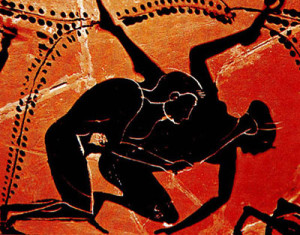 A few Saturdays ago, Ryan was invited to watch UFC 182, Jon Jones v. Daniel Cormier, at his friend’s house. Because of a prior commitment with our little ones, I wasn’t able to go. This was a very highly anticipated fight for Ryan, so I told him to go and to call me if he got bored or if he wanted to say hi. The preliminary fights started at 7:00 p.m. and the house was an hour away. He was bringing drinks, so he knew he had to leave about 5:30 so that he can stop by the liquor store and get provisions.

4 o’clock rolled around and he hopped in the shower to get ready. Meanwhile I went to the kitchen to pre-heat the oven for pizza. I set it to 455 degrees fahrenheit. It called for 450 degrees, but I was too lazy to hit the minus button on the oven to make it exact. I’ve never known a frozen pizza to burn because of five degrees.

20 minutes later, Ryan is ready and I put the pizza into the oven. We all flock to Ryan in the kitchen to say good-bye to him and to shower him with hugs and kisses, but I’m not ready for him to go yet. I touch his crotch and told him that I wanted to fuck him. I pull him into the room and start to undo his pants. “Damn, girl! You just had it! You want it again?”

“I know you’ll be home late and I don’t want to miss our time together tonight,” I told him.

Very quickly, he took off his jeans and sheer boxer briefs, I slipped off my shorts and t-shirt. I pinched his nipples as he pulled his shirt over his head. He scooped up both of my legs so my pussy was exposed and slid his tongue inside my vagina and wiggled it violently.  He made sure my pussy was wet so his dick had no problems squeezing inside me.  I pulled him in close knowing I didn’t want to let go.  He was in a hurry and fucking me so hard my body was moving up the bed towards the wall.  I begged for him to leave all his cum in me before he left. And he did, leaving my thighs dripping as he stood up over me.

We get dressed and head back into the kitchen. “What time is it?” he asked as he looked at the digital clock on the oven. “4:55? It’s still that early?” He then looks at the timer on the microwave, which I had set to let me know when the pizza was done, which read 4:36.

The timer then ticked down to 4:35. I giggle because I knew it was on timer mode.

“What time is it?!” He looks up at the clock over the kitchen threshold, which has had a dead battery for weeks.  It read 3:12. “OH MY GOD, What time is it? WHAT TIME IS IT?  This is insane.”

I snicker as he looked frantically for his phone, which he couldn’t find. He turned on his computer screen and looked at the bottom right hand corner of the screen. “Oh, Hewlett-Packard, you’ll never let me down, will you?”

TAGS: back to the future, pussy so good it takes you back in time, good pussy, time travel