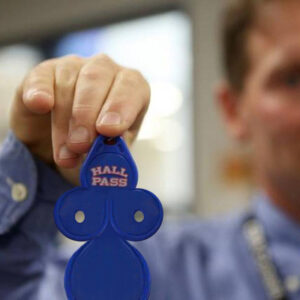 Don’t be disappointed because the woman you married is still there – the one who went to kinky parties and swing clubs with you, the one who kissed a girl, the one who discussed the possibility of an open marriage – and she’s waiting to be talked to. It seems that she decided to go the tame, monogamous life who puts her family first. And of course, there is absolutely nothing wrong with that. Maybe she doesn’t think it’s right to have those same thoughts and emotions now that she is a mother. I can tell you that it’s very possible to balance between the person she was then and the person she is now. She may need to see others who can do it successfully, to be around older, married couples who’ve been in your shoes, and to research other relationships who took the right steps (i.e. discussed their needs, limitations, promises to each other, and relationship goals before saying “We should trying fucking other people”).

Ryan’s response:
Talk with your wife and see if she is still interested in an open relationship.  If you are asking us our opinions on whether or not your wife should allow you to have a second relationship or an open marriage, that’s really something we have no say in.  Our opinion on what your wife should or shouldn’t do is absolutely irrelevant, because there really is no right or wrong in this situation.   Unless of course it’s a religious conversation or someone on a moral pedestal claiming their way is the only right way (and a lot of times, these moral police are hypocrites).  If she feels sleeping with other people is wrong and isn’t interested in an open relationship, that’s just something you have to deal with.  You can’t force her to be okay with you guys sleeping with other people.  She could be single and still have no interest in dating or being intimate with guys, so maybe her libido has just turned off.  Maybe not.  What’s important is, both of you should communicate and see what you would or wouldn’t be open to. If she decides it’s something she just doesn’t want to do, then you will just have to accept it.  No relationship guru or sex police will have any ground to stand on if they were to suggest that she is close minded and wrong.  She is normal, and most women would never be okay with their husbands having sex with other women.  And by most, I mean over 90%.

The number of adults with open relationships — be they formal marriages or more informal arrangements — is small. Probably about 4% to 9% of U.S. adults have some sort of open arrangement, estimates Franklin Veaux, 41, an Atlanta-based computer programmer and web site developer who also runs a polyamory web site.

Others, including Steve Brody, PhD, a psychologist based in Cambria, Calif., put the number much lower. “It’s got to be less than 1%,” he says. He has counseled thousands of couples in the past 30 years and has encountered very few instances of open relationships among his patients. – Article published on Webmd.com (The Truth About Open Marriage)

What’s really interesting is, studies show that 30-60% of partners will at some point cheat on their spouse while married.   So, there are a lot of hypocrites out there that decide an open relationship isn’t right, but still end up cheating.  I’m glad you’ve been ruthlessly faithful, as loyalty is the key to a successful open relationship.  I feel this is the reason why Venice was comfortable bringing other women into our bedroom.  I may not be the greatest guy in the world, but she knew I would never cheat or do anything behind her back that would hurt our marriage/friendship.

Endorphins (“endogenous morphine”) are endogenous opioid inhibitory neuropeptides. They are produced by the central nervous system and pituitary gland. The term implies a pharmacological activity (analogous to the activity of the corticosteroid category of biochemicals) as opposed to a specific chemical formulation.

Now ask yourself, are you the exact same guy you were when you and your wife were falling in love?  Doubtful.

With all that said, I understand the resentment you seem to feel for her original interest in swinging or an open relationship.  Talk to her and find out what she feels.  Ask yourself if you make her feel special, you take her out on dates, you give her a reason to want to be intimate with you.  Do you still make her feel like this beautiful goddess like you did when you first met?

Communicate and question the things that have changed in you over the years.  Your sexual behavior and kinks may be the same, but those things were not under the influence of endorphins like maybe your wife was when she was falling in love.  If you can recapture that feeling, maybe your wife will be open to other things.  Maybe not.  If not, you will have to live with that, unless you decide to exit the relationship…as the bad guy, because you’ll never be “right” when suggesting the idea of opening your relationship.