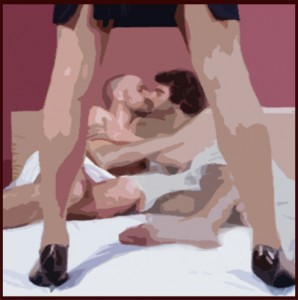 I’m here because I found out my husband is cheating on me and I need advice.

My husband and I have been married for 5 years and have 1 child.  We married young and although I never told him, a few days before my wedding my husband’s best friend made a pass at me.  I figured it was the alcohol and didn’t want to ruin my wedding so I never told anyone.  Although he never hit on me again, I always felt he was a douche.

Anyway, last week I was sitting on the couch with my husband watching television.  He just upgraded his phone to the iphone 5 a few months earlier.  I was messing around on it  and for whatever reason he just snatched it out of my hand.   I didn’t say anything because I never really went through his phone before, but I knew this was a red flag.

When he went to sleep, I snuck over to his side of the bed and grabbed his phone off his night stand. He must have just added a lock code but I  put in his birtthday and it unlocked.  At first I checked his browse history and didn’t find anything suspicious.  I then went to his bookmarks and text messages, still nothing.  At this point I figured I overreacted and started just messing with his pictures and stuff.  Immediately I noticed that he had some porn type stuff.  I looked closer and it was him.  My jaw hit the floor.

There are tons and I mean tons of pictures of my husband giving oral sex to another man.  Even more disturbing is the fact that the majority of the pictures show my husband’s face covered in semen. I just totally lost it and started crying. To make matters worst, there is a video of him giving his friend a blow job on the toilet.   This is how I figured out who the other man was, in the video I hear them both talking back and forth.    It’s his best friend.

I’m so disgusted because these two have been friends for over a decade and I feel like my entire marriage was a lie.    Should I just file for divorce after I show him what I found or should I have a talk with him about our relationship?  I am confused because there is no other woman.  At the same time, I am disgusted by what I saw.  I am also heartbroken by all the lies.  I don’t think I can ever trust him again.  I feel so used.  I also feel this weird feeling that maybe he asked his best friend to hit on me hoping I would cheat on him with his secret lover.  This is all just so confusing.

Any advice would be appreciated.

Thank you for your question.  I’m sorry that you have been put in an awful situation.  But the solution is simple: get out while you can.  I know it’s easier said than done to tell you to leave him, especially when you have a young child together.  But I’m thinking about the long run as his sexual desires progress by moving to other areas of his life.  I don’t pass judgement on his sexual preferences, but it’s his dishonesty that has caused him to keep secrets from you.  You could have gone to counseling or separated amicably, but now you have to worry about how long he has been doing this, with how many men, if he has any diseases, if you have any diseases, and of course, the lies he has told you in order to be with other men.  It’s endless.

There are multiple levels of wrongness done to you: cheating, dishonesty, and the betrayal of your wedding vows.  I could understand if you’ve both had prior discussions about bringing other fantasies into your marriage, but it doesn’t seem like you have.  Or even if you have, you certainly did not agree to the behavior and lifestyle portrayed by the pictures with his friend.  Even if he says he’s willing to change, you have to understand that the hormones that drive a man are very powerful, strong enough to put his marriage, health, and family, in danger.   If you do decide to stay with him, understand that his sexual demons are hard to expel, so know that he will have to work with those demons on an hourly basis to keep them from taking over his life.  Get answers, get honest answers: is there even the slightest possibility that he could do this to you again.  I would want 100% assurance, and if there’s the slightest hesitation, it’s over.  I would never give advice I wouldn’t take myself.  In this case, I would leave.

I would also get tested for STD’s just in case.

Personally I feel cheating and lying can’t exist without the other.  The two cannot be seperated.  There is a huge difference between being open and honest with your partner about your life and desires, and living out your desires but keeping your partner totally in the dark.  The act of being with another person isn’t cheating, it’s the act of being with another person and lying about it.   I want to make sure I said that because you mention that you were confused because there was no other woman.  I get what you are saying, because if Venice was to sleep with another woman, I wouldn’t be upset unless she kept it a secret from me.  The secret could mean Venice has feelings, wants to betray me, enjoys sneaking around, or just knows she was doing something wrong.  For me, this behavior is a violation of your relationship.  He doesn’t respect you or your feelings.  That’s cheating, regardless of the lover being the same sex.

With that being said, you were blatantly lied to and cheated on.   You are not confused at all, you are exactly right, your entire relationship is a lie.  You should never trust your husband again and my advice is to get out while you can.  Not only is he not the man you thought he was, but he is possibly totally gay and in the closet.  He may have used you to hide his secret life, but giving a blow job to his best friend on the toilet isn’t something he can just fix and stop.  That is rock bottom gay and  apparently he loves it so much he recorded it.

Get out, file for divorce, and read about his possible narcissistic personality disorder.  He married you and had a child while living a lie the entire time.   Not good.

If you can keep the divorce friendly for your child’s sake, that would be great.

16 thoughts on “Q&A: My Husband Cheated On Me With His Best Friend”