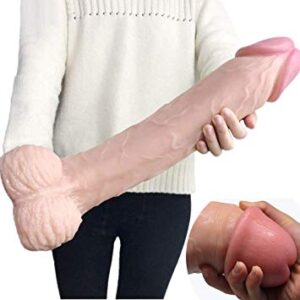 Venice:  It surprises me how many times this question comes to us.  It’s obviously a big issue for men.

Venice:  No seriously, with the wide array of things to worry about in a relationship, it seems like this huge issue hits home the hardest.

Venice:  Will you please stop!

Ryan:  That’s what his wife said…

Ryan:  Okay, sorry.  What were you going to say?

As much as you think it would embarrass her to hear this from you.  If I were in her shoes, I’d be so much more embarrassed knowing you felt that way, and allowed me to think everything was okay.  I’d feel much worse than embarrassment.  I always want to know if I am doing something that turns my husband off, always.

Can you imagine if I bought a life sized doll with the exact same vagina as my wife?  I am sure that wouldn’t go over so well, no matter how sex positive I was trying to be.  Well now imagine that I bought a 50 foot woman doll and climbed up inside her vagina and bounced around in it nude for a few hours to get myself off.  Pretty silly right?

If you seeing her enjoy herself is something you can’t give her, get over it.  She will get over it too.  Women don’t sit around and think about how great a huge cock feels to them.   Men do that.  It’s why you have such a problem with it.  Your wife isn’t going to obsess on that huge dildo because it made you uncomfortable.  In fact, once she mentally knows it bothers you, she may hate the idea of ever using it again.  Because she loves you.  She probably enjoyed it so much because she thought it would turn you on to see her extreme responses.