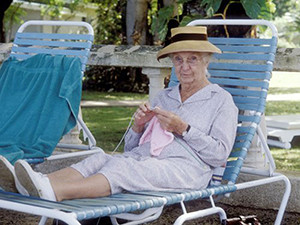 With all these factors in mind, is there even the remotest chance that she’d be receptive to having a sexual relationship with me, or am I just deluding myself? And if there is a chance, how do I show her that I’m interested? I know you’re all going to say “communication,” but the thing is, if I suggested anything like this to her and she wasn’t receptive, the following communication would be seriously awkward, if not downright ugly.

Venice’s response:
Let me just say that your thoughts about older women (sexuality, view on sex/relationship, etc.) are certainly interesting. There are so many reasons why you should not pursue a sexual relationship with her. One, she’s a married woman. A good woman doesn’t cheat on her man no matter how young and ripe you may think your fruit is to her. Two, there’s more to getting a woman than just thinking that she, as an older woman, should be grateful to have a younger man avail himself to her. Three, you should not think that her being post-menopausal or possibly STD-free are reason enough for her to be okay to have unprotected sex with.

With all that being said, with the exception of her already being married, any one of the above-mentioned reasons you stated is not reason enough to deter you from getting some bootay. Personally, I would leave her be and go find someone more in your own “range.” However, if you decide pursue this woman anyway (which you may do because you seem very passionate and you’re up for the challenge), let me share a few words of wisdom.

First, cliche as it sounds, communication is always the key. Messages aren’t always conveyed verbally. In your case, you don’t have to come out and say, “I think we should have sex.” You may want to take up knitting with her and maybe spell out “sex” with your yarn. Or maybe you could typewriter back and forth to each other. Flirt with her a little. Compliment her knee high stockings and wooden clogs. Maybe even clean off the tennis balls on the bottom of her walker. Don’t be too aggressive as to give her the wrong message or scare her away. Since you are the one trying to “catch” her, let her do the biting. She probably knows how to fish, her tribes people probably invented fishing when she was a child. Be subtle. I would suggest watching movies like “Gone With The Wind” (in black and white without good sound quality, buy the crappy VCR version) to make her feel at home, and then maybe throw in “Twilight” to show her how love is now.  You know, age is just a number. Take some flirting tips from Edward Cullen, 21st century vampire extraordinaire.  He thinks the much younger Bella is just the bee’s knees! Second, I would take things slow. Women like to be courted, to be wooed.  But don’t make any sudden movements; it may startle her and give her a heart attack. Maybe even bring her a goat to trade her husband.  And lastly, like all women, I like to be cooked for. Most likely she does too. So surprise her by making a nice dinner, like meatloaf and mashed potatoes followed by a chocolate malt shake that the old corner store used to sell for a nickel. Yum!

I hope everything works out for you. I’d like to hear how it turned out.

Ryan’s response:
So she is married, has a conservative view on sex, and doesn’t approve of relationships with a large age gap? While on the other hand you are a virgin that thinks she may benefit from having sex with a guy who has no idea what he is doing?  I’m sure she will enjoy explaining to you why your penis doesn’t belong in her belly button and how sex actually works. Talk about a good time for her.