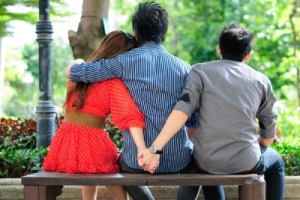 I just joined and read your profile and I am happy about how you are comfortable with your wife being with other women and that you are committed to being only with her. Has it ever come up with her being with other men, and if it did/did not, how would you react?

My ex-wife wanted to have an open marriage in which she could be with men or women, and encourage me to seek out other women. We had a 1 year old son at the time and I profusely said no, despite the tempting offer that I could mess around with other women. She blatantly went against me and dated other men and would tell me how she was ready to fuck them and do many things with them that she wouldn’t do with me. It ensued and eventually led to me filing for divorce on the grounds of infidelity to me after 5 episodes of her fucking other guys and still wanting to maintain a marriage to me. Many people have told me, well if she did it why didn’t you? Well, I’m a one woman guy, and that is part of the marriage bond, is it not? Your wife fucks other women, but you are present….. If you were not present, would you feel as though it was a betrayal against you since she feels equally the same about men and women? Does she date, love, and fuck women outside of your marriage? Why don’t you seek out the opportunity to be with other women- is it your nature not to? If so, why have you both agreed that she can? Help me understand, just seeking some peace with my own decision to divorce my wife since she was with other men, when really she could have been with other women as well (maybe i wouldn’t have felt betrayed?

Thanks, and I enjoy your site.

Ryan: To clarify our situation, which I admit over the last few years has changed a lot, we only play with the other woman together.  Not only is this a hard boundary in our relationship, anything else I would absolutely consider cheating.  And yes, I consider cheating to be a trust breaking event that would inevitably lead to divorce.

If Venice decided she would like to experience other men, she would have to make the choice to leave me first.

My wife is not my possession and I would only wish that she does everything in her life that makes her completely happy. But, if she decided that she needed to do something that made her completely happy, yet made me completely miserable, I would exit the relationship to find my own happiness.  Or, I’d find a person who has the same goals I have in our happiness.  The keyword being our.  If a person is in a relationship and put his/her desires ahead of his/her partner’s needs, (s)he is selfish, neglectful, and does not understand marriage.  For us, being that Venice is bisexual, having a threesome with another woman was not hurtful (beyond her wanting to keep me to herself, and me wanting to keep her to myself) to either of us, because we are both attracted to women.   The choice wasn’t about one of us having to do something the other hated, the choice was about whether or not it was worth it to try a threesome with another female and change the dynamic of our own relationship.  I would have never forced Venice to do anything she was unhappy with.  After long talks and 15 years totally monogamous, we decided as a couple to experience other women.  Could I have lived the rest of my life with just Venice? Absolutely.  My loyalty was unwavering and I wouldn’t even glance at another woman or talk about another female to my guy friends.  In my circle, I was the weird guy that was considered “whipped” because I wouldn’t join in on sexual conversations. I prided myself in staying loyal and totally committed.  I could be a piece of shit in plenty of other ways, but never when it came to my loyalty.

Since I am not bisexual and do not have any interest in men at all, what purpose would it serve us as a couple to experience other men? I do not have a voyeurism or cuckold fetish and do not find seeing my wife with another man attractive. I have no desire to touch guys or see a guy touch my wife. Had Venice not been bisexual, we would have never had a threesome to begin with. Our threesomes only happened because Venice had the desire to see another girl in our bedroom.  Her desire to taste, touch, feel, and be felt by another woman was something she felt like discussing.  If she knew it was something that would hurt me, she probably would never have mentioned it. Since I didn’t find it offensive, we talked about it and concluded that as long as she was okay with exploring her sexuality with me, we could enjoy these experiences together.  With men, there is no sexuality to explore, if she wanted more men, it just meant she wanted more men.  She’d never say that to me, because we both know that is something we’d consider a relationship breaker.  And she’d feel the exact same way, if I was to approach her and asked her to let me have more vagina, without her being bisexual.  She would have divorced me quicker than I could have finished that sentence.  Venice was the most jealous person I had ever met, and I took that jealousy and embraced it.  She was the only person in the world that I felt ever claim or possessed me (I know that sounds desperate or pathetic).  I loved it.  To this day I still ask her, “Does you being less jealous mean you love me less?”

Her answer is always the same, “Nope, it just means that I grew up.  I know you would never hurt me and I trust you.  You’ve earned that.”

To answer your question about the possibility of Venice spending time with a woman alone, the answer is no.  Man or woman, if you are alone with another person, that isn’t about us as a couple, that is about you as yourself.  To me, that isn’t marriage.  I have no desire to ever date, spend time with, or be alone in a room naked with any woman on earth except my wife.  In fact, these experiences she has given us has taken away even the little spark of curiosity that lived somewhere in my head I never really spoke about.  Her knowing, her seeing, her watching, her being totally apart of our experiences, has made the idea of one on one (behind her back) the absolute least appealing thing I could ever think of.  I’d want my best friend to know everything about everything I’ve done.  And I’m not saying she is my best friend because it’s cute to say, Venice is actually my best friend, in every sense of the word.  We even fuck girls together.  If I couldn’t share my experiences with her, my best friend, I wouldn’t enjoy it.  I can only hope she feels the same way.

Which leads me to your comment about the marriage bond.  I agree with this comment, as far as experiences go.  I do not think experiencing another person  together (threesomes) is breaking any bond.  In fact, they are still very much bonded, there is just another toy in the room.    However, every relationship is different and if both adults are happy, and what they do makes them both happy, then again, I don’t see a break in any bond.  The bond is broken when you force someone to do something they really don’t want to do (including staying faithful).  It’s complicated, but it really isn’t.   If you’re both happy, and doing things that make each other happy, any other issues regarding what others think about marriage is absolutely irrelevant.  In your case, what she was doing made you miserable.  Her staying faithful made her miserable.  That sounds like you made the right choice in ending that marriage.

Marriage isn’t about how faithful you can be to another person, when you both aren’t happy being faithful.  Marriage is about how faithful you can be to your spouses needs, while they give you the same in return.  It’s about two adults working together to find happiness with each other.  If you both were okay with being in an open relationship, who cares what another person thinks about your definition of marriage.  If you were unhappy with the idea of an open marriage, and she wanted it, that marriage isn’t working.  If you are questioning your decision, I wouldn’t.  It sounds like you made the right choice. Hopefully you can find someone that has the same relationship goals as yourself. That’s the key to a successful marriage.

By the way, great question Joe.  I wish we had more questions like yours.

Venice: You told her that you had no interest in being with another woman or with her being with another man,, yet she did it anyway.  To me, she blatantly disrespected you – as a husband, as a friend, as a man.  If my husband were to get tired of me, fall out of love with me, be bored in the bedroom with me, etc, at the very least, I would want him to RESPECT me.  And rather than leaving you to go out and fuck whoever she wants, she disrespected you and went against your wishes.

For me, it’s not about wanting to be with other men.  I don’t have a sexual desire to be with other men, besides Ryan.  My lust is for women.  During the process, I stepped out of my comfort zone by bringing another woman in the room (as did Ryan — I saw and still see his issues that he has never had with me), and found out not only did I enjoy women, but I also enjoy the act playing with a dick with another woman, talking dirty to the other girl while she puts her face in my husbands lap, and just being around two people I am attracted to, yet both of them having totally different bodies and parts. Additionally, I don’t want to have a relationship with anyone else – man or woman.  I have my BFF.

3 thoughts on “Q&A: To Ryan, What If Your Wife Wanted To Be With Men?”