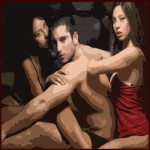 Ryan and I have discussed that we definitely would like to add a third.  But it depends on the comfort level of each couple, do they want a long-term relationship with the third or just a one-time experience. For me, I want  my first experience to be done on my terms and to do that, it meant that I had to get to know the person.  Otherwise I can go to a swinger club and give myself to the first willing participant.  And even if I were willing to go to a swinger club, the fear of the threat of STDs was too strong for me; so strong, that I wouldn’t enjoy it at all. You know what they said in sex ed: abstinence is the safest way. Aside from the STDs, my biggest worry would be that the woman would not follow my rules and ruin my experience anyway. My ideal first “threesome” could only work if the woman was willing to follow my bedroom rules and not get carried away at the moment.  This is exactly why unicorns are sought after and hard to find.

As far as “safely” adding a third to our bedroom, it is almost impossible.  As I look for a woman, I expect to go through the same process as I did when I found my husband.  And like my husband, she won’t be perfect, but she will be perfect for me.  I expect honesty, respect, and loyalty.  It may takes months, even years, to find this person.  I mean, there are dating sites dedicated to assisting the single person with this process.  If it were easy for a woman like this to find (or even exist), couples like us would have one.

For the sake of responding to this question, let’s say escorts were legal.  I would consider that an alternate route in seeking the third.  Worrying about boundaries being crossed would no longer be an issue at all.   I doubt “pros” get carried away in the moment and do extra they aren’t being paid for.   It’s been reported that places like the Moonlite Bunny Ranch and the like provide services similar to what is commonly thought to as prostitution.  While many ladies in the establishment are required to, and thusly, pride themselves in, getting frequently tested for STDs, being disease-free is not 100% guaranteed.  Again, for the sake of answering, let’s say all escorts are clean.  I could easily see couples turning to escorts to fulfilling their first threesome fantasy so that the man and/or woman could get what they wanted (sexually) without any jealousy or strings attached.  For me, I would much rather enjoy someone who prefers my company for me, not because I’ve paid them.  But with the shortage of “unicorns” beating down our bedroom door, I certainly do not turn my nose at the legal escort option.

I don’t think there is going to be a right answer for this question.  In the past, Venice and I have established that the third person would have to be special.  I think that was an honest first thought from us both.  If we share our bedroom we want to make sure that it is with someone that we both trust and want to be in our bedroom.  However, the more I think about the situation, the more I wonder if building an emotional attachment with the person you share your bedroom with is a good idea.  I think in a perfect world (of ours), that would be great.  However, there isn’t a group of women lining up at the idea of being an unattached third that is used to oil our parts, so our engines continue to run properly while they watch the race  from the stands.

Of course Venice and I would prefer to find someone that Venice personally enjoys being around while at the same time respects our marriage.   I’d say this is a long term goal for any couple looking to spice up their love life when the other half is bi-sexual and wanting to experiment and try new things.  I know Venice would absolutely give me those same options if it was something I wanted.  We’ve never put restrictions on each other regarding something the other couldn’t offer, same-sex relationships.  We never promoted the idea or thought of practicing, but since the beginning of our marriage, we have always been very open about our jealousy only extending to the opposite sex.  As we’ve grown and earned each others trust and loyalty, some doors have opened.   As long as we experience each new thing together, we both seem okay with it.

Although the previous scenerio would be great, there seems to be a weird feeling of “finding someone to use for our pleasure.”   An emotional attachment and friendship seems wonderful,  but it also feels like those same wonderfuls can be the beginning of a lot of miserable — drama and problems.  For now, it really is just about finding a sexual tool to please our selfish desires.  Finding this sexual tool that wants nothing more than to please a couple and go on with her day, seems unlikely — except for a “pro.”  It’s her job.  Of course, the first reaction to the word “pro” or “escort”  is, “disease.”  This isn’t an overreaction, because I am the biggest germ freak I know.   If you plan on having sex with anyone, including an escort, use protection.   I’d say the same for swingers or a single woman.

In our case, neither Venice, nor I, want me to have sex with anyone.  Oral sex, touching and fondling, and everyone enjoying everyone’s nude body is okay.  Because we have no intentions of me having intercourse with anyone other than my wife, the disease issue isn’t as risky as a couple who wants to experience the man fucking both women.  Of course, you always have to worry about oral STDs such herpes, but I think in every facet of this lifestyle, that’s a major issue.  If you are a couple like us, the “pro” option may be something to consider and talk about.

However, we  don’t live in Vegas so this isn’t an option for us.  If you and your wife have discussed this option and it seems like something better for you both, I can definitely see the positives.  In fact, I have a suggestion.   A great place to start with this idea, just to see if this is something you’d both enjoy, is a strip club.  Ask your wife if she is interested in going to a strip club with you.  Buy her a few lap dances and let her buy you a few.  If this turns you both on, you may actually enjoy the idea of the third truly being a ‘no strings attached.’

Good luck and keep us updated!