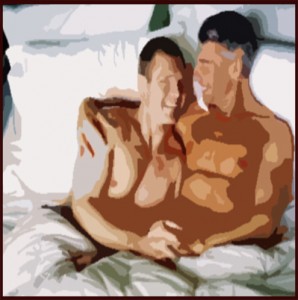 Hello, very interesting site.  I actually ended up here because of xhamster but do have a question for you both.  Well, I guess I just need your advice.  I have been married for 11 years to a beautiful woman that is my absolute best friend.  We have a 9 year old daughter together and everything is perfect, except I have absolutely no interest in women.  Although I suspected I was gay from an early age, my dad was very strict and I just wanted to make my family proud.  My wife was the only woman that ever really turned me on, so I figured she was the one.  Now, 11 years into the marriage, I cannot get an erection at all with her.  In fact, our marriage has been completely sexless for about 3 years.  This is killing my wife, as she thinks I have an erection disorder or find her unattractive.  She has purchased books on sex and marriages, has given me oral sex for what felt like hours, and still nothing.

I can’t imagine how torn you must feel.  It was a good move for you to ask you wife about an open marriage.  Have you told her you were gay yet?  If not, that may be the reason her feelings have been hurt.  It goes without saying that you will need to break the news to her gently.  Reassure her with the positive things about her and your relationship before you tell her you’re no longer interested in her, or other women for that matter.  I would suggest telling her how much you love and care for her and that the reason you are approaching her with this news is that you would rather be honest with her first before hurting her.  If you’ve never cheated on her – with a woman or a man – tell her that too.

If it were me telling my husband this news, I would make sure he understood that it wasn’t that I didn’t love him, but I could no longer continue in a marriage under the assumption that I was a straight woman, and that if I did, I would be doing us and our daughter a disservice by living a lie.  Try to make her understand that attraction to one’s partner – sexually and emotionally – are crucial parts to making a relationship work.  If they’re missing or unfulfilled, that person will almost likely turn to someone who can fill that need.  If not, that person will live in misery.

A marriage cannot survive purely on love.  Sexual attraction, honesty, and loyalty are important elements that define a successful connection.  In your case, honesty is going to play a huge part in how your wife will perceive your “break-up.”  The one thing that would ease my mind if I were your wife is the fact that you don’t want to continue hurting her.  When it’s all over, she will be able to say, “At least he didn’t cheat on me.”  That may the best thing that comes out of this.

This is a tough one.  The key to a good marriage is communication, but in this case, communicating that you are gay and prefer an open marriage may end your relationship.   I suppose it comes down to what your goals are as a father, husband, and man.  If you want to be openly gay and can no longer live the way you are now, talk with your wife and accept what’s going to happen afterwards.  Let her know that you are not in a hurry to start meeting guys and having sex with them, but you want to quit hurting her.  When she realizes that you aren’t just going to pack your bags and jump in the sack with a bunch of men, she may relax and appreciate the honesty.  It’s not unheard of in these situations for the wife to end up being your best friend, but I doubt she will stick around as your wife and keep you as her gay husband.   You can both still raise your daughter but it may be in two different households.   This is something you will have to understand before you make your decision to talk with her.

Another suggestion I have: after you tell her, if she is understanding of what’s going on with you, ask if you can bring gay adult videos into the bedroom.  There is an article floating around written by an ex-Playboy Bunny who has said that Hugh Hefner would line all the in-house Bunnies up twice a week outside his bedroom door, and one by one they would service them.  Whether it be oral or sex, they would take turns, maybe five minutes each.  Although this seems like a dream come true for most men, the article stated that he would have gay porn playing on a movie screen in his bedroom to help him keep his erection.  Maybe after you come out, your wife will understand you need certain things to achieve and erection, but once you get that erection you can both enjoy it.  I really don’t understand how your own hand could be more sexually attractive than your wife’s hand, mouth, ass, or vagina.   Your hand isn’t a man.