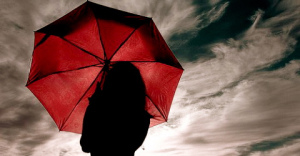 So, why do we blog? Because we are weird and do weird shit.   Somewhere along the lines we decided to share these weird things with the rest of the world because, well, why not?

We didn’t get into blogging for traffic or to sell sex products.  We didn’t even know if our blog would ever be read by anyone other than ourselves.  However, we both got off on the idea that our random thoughts and sexual experiences would be online for us to read whenever we wanted.   Almost like a public diary.

Today I am going to create a rating system for my orgasms.  Why? Because yesterday as Venice was giving me a blow job I couldn’t stay still.  She had both of her hands around my dick stroking me while she kept the head of my penis in her mouth.  This technique literally gets me so high that I cannot function.  My eyes water up, my ears get hot, my face goes numb, and I literally feel like I have no control over my body.  Like when getting a buzz from alcohol (I’m a very happy drinker) or some sort of drug, everything I look at gives me this euphoric feeling.   For instance, when I am in this high drug-like state, I look down at Venice and she is like an absolute angel.  My mind is in an extremely positive state and everything about her makes me happy.  Her looks, her body, her personality, everything, becomes angelic.   It seems chauvinistic, but I swear a woman is at her most beautiful when she has a dick in her mouth.  I don’t know if it’s the addiction to this feeling it creates or I am just a douchebag and like seeing Venice suck my cock.  However, my truth, between you and me Diary, she never looks more perfect than when she is giving me oral sex.  I do not care if she has spit all over herself and my dick, has tears running down her face, pulls my dick out and beats it against her own face saying how much it hurts, is moaning with each slurp like my dick is the best meal she has ever had, and is twisting her neck back and forth in weird motions just to let me know she wants to rub her jaw and mouth on every angle of my penis, she is flawless.  Beyond a super model. I feel some women do not get that they create this feeling in men.  They see oral sex as submissive or disrespectful.  If they do give you oral sex it’s slow, with little movement, as if they are eating at a classy dinner table and want to use proper etiquette.   The more you try to be polite, the more awkward you look. If you stop to wipe off spit, or giggle because you feel uncomfortable, you are ruining the moment.  Sucking our dicks and then not touching it because you may get your own spit on your hands is an absolute mood killer.  There is no nice classy way to give your man oral sex.  You either suck him with authority and put inhibition on the back burner, or you are not really that good at giving head.  That is it.  If you still feel like a lady while you are sucking your man, you probably aren’t doing it right.

Back to the point.  Good thing this is only for me and my Diary, otherwise I’d have to explain to the readers why my thoughts are so random and all over the place. By the way, if you aren’t me and you are reading this, please stop now.  No one gave you permission to look through my Diary.  Just because it’s here on the blog doesn’t mean it’s right for you to snoop through my shit.  Shame on you.

As I was saying, I just couldn’t keep still.  The more she sucked, the more I was circling my hips and holding the wall above my head with both of my hands.  I grinded my body against her face, moaning with each of her strokes, almost in tears because of how good it felt.  I felt my whole body go numb and I no longer heard any sound other than her lips slurping on my dick.  My body convulsed and I lost all composure as I jerked my cum into her mouth.  When I orgasm, my dick is as erect as it will ever get, so Venice will work her throat down my slight curve and erection until her lips are resting against my balls and pubic bone. Although she can easily deepthroat regardless of what type of erection I have, she has the most trouble right before I orgasm.  I can feel her grab the back of my hips and force her lips down my cock, struggling a bit to push it down her throat without being able to bend my shaft.  This tightness and push feels amazing while I orgasm.  It almost mimics the sensation of me driving my body deep into her pussy or ass, letting the pressure of her back walls intensify what I feel while I ejaculate.

After we were done, I could tell she knew I really enjoyed myself.  She cutely asked, “How was it?”

I knew she wanted to know if my orgasm was as good as my body language  responded so I replied, “It was probably the best orgasm I’ve ever had.”

She got up from the bed and laughed.  She had heard that so many times I could tell she wanted a different answer.  She jokingly responded, “You say that so much that I just can’t take it serious anymore.”

She was right, I did say it a lot.  At first, saying those words meant something. But lately, it was all becoming a smorgasbord of amazing orgasms. She can always tell when my orgasms are good or really good.  And these days, I have a lot more really good, than just good.  It wasn’t always that way though.

For the first few years of our marriage, I was young and not in tune with my body. I can’t remember ever having an orgasm that wasn’t the same as me just jacking off alone in the bedroom. Although I loved having sex with Venice, the orgasms seemed like nothing more than an anatomical function.  We’d fuck until I would feel that sensation under my balls.   I would move faster, creating friction with our bodies until the pressure from my prostate released semen into her body.  Then I would collapse on her, while my penis emptied inside her.  Actually, for the first 10 years, we used the “pull out” method as a form of contraceptive, so the truth is, most of the times we had sex, I would pull out and cum on various parts of her body.  In hindsight, this is probably why none of my orgasms were more than average.  I’ve learned that stopping my body mid orgasm to sit up and jack off while I released, took away almost all of the intensity I felt otherwise.

Okay Mr. Know-It-All Diary, I know what you are thinking.   If you know everything, explain to me why Venice didn’t ever have any unplanned pregnancies?   I don’t care if you think I am foolish for “pulling out” as a form of contraceptive.  It worked.  Explain that.  For 10 years, not once did we have an accidental pregnancy, but when we did decide to try and get pregnant, within a month, it happened.  So laugh at the “pull out” method all you want, but it worked.

…whatever, you think you know everything.  I don’t care what you read on CDC or what your sex education teacher (who was also the basketball coach and health teacher) said to you.  Please, quit interrupting me, I am trying to make my Orgasm Rating Scale.

Fuck, my Diary is annoying as hell.

Without further adieu, I present the Orgasm Rating Scale.  At first I decided that I wanted to use the 5 star

system, because it’s simple and works.  However, scrolling through the different Emojis, I am wondering if maybe I should use the umbrellas?

Trust me, if you were on the receiving end of my 5 star orgasm you’d absolutely need an umbrella.  In fact, I think the stars would be pretty useless to you unless they were made of the same material you make napkins with.  Just sayin’.

):  This orgasm is also called the old “lock the bathroom door” or “dang, he really takes long baths” orgasm.  There is very little mental satisfaction beyond a physical release.  This is the orgasm we get when we masturbate by ourselves or hurry up and orgasm before our parents came home, not only was the orgasm quick and uneventful, it really wasn’t that intense.  No build up, no one to share it with, and pretty much your dark little secret that you did so many times it didn’t even feel like a secret anymore.  Rather than shooting sperm all over yourself, it dribbles out of your body, onto your lower stomach or onto a napkin.  Clean and quick.   The 1 Umbrella Orgasm is at the bottom of the orgasm list.

Some examples of a 1 Umbrella Orgasm:

Some examples of a  2 Umbrella Orgasm:

Some examples of a 3 umbrella orgasm:

): These orgasms are intimate and feel amazing.  You can shoot across the room, be totally excited, and physically feel great.  They are not the best orgasms you’ve ever had, but they are the orgasms you want every time you have sex with your wife. These are the orgasms men chase, and the reason we are addicted to sex.  It’s the perfect release and comparable to 2 Umbrella Orgasms except with a person to share them with.  Physically they feel amazing in every way, the release is major, and your partner usually feels like a porn star after giving you this climax.

Some examples of a 4 umbrella orgasm:

Some examples of a 5 umbrella orgasm: