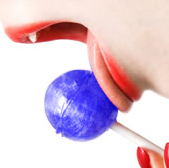 1.   Positioning.  Find a position that will allow you to be comfortable.  This is probably the most basic trick you’ll have to master when it comes to oral sex because if you’re not comfortable, he won’t be either.  One way is to have him sit on the couch while you kneel on the floor between his legs.  This position is comfortable for the both of us.  The only shortfall is having to transition to the bed.  I used to have a lot of trouble sucking my man off when he was laying on the bed.  When I’m facing him and between his legs, my neck tends to get tired, my forearm muscles get numb, and shoulders get cramped.  I ended up having to constantly change positions, stop and go again and again, which disrupted him, throwing him off.  I found a simple solution to this problem: shit talking.

3.  Get into it.  Show your enthusiasm.  Let your man know you love sucking his di ck.  Moan with his dick in your mouth.  It may sound like you’re saying, “Mmm..mmMMmm..mmmmm. Mmm-hmmm. Mmmmmmm…!” But what you’re really saying is, “Oh, my God, yes! Give me some more of this juicy dick.” When you get the chance to shit talk, you don’t have to actually say words.  You can moan with pleasure, too!  If your man knows you absolutely love him in your mouth, it helps with the excitement.

5.  Describe what’s going on with his body.  I didn’t realize until Ryan asked me one day as I was stroking him, “Is my dick hard?”  It took me by surprise because I figured he’d be able to tell by the way my hand moved up and down on his shaft.  So from then on, I made it a point to give him a play-by-play of what his body was doing. “You’re starting to get thick and heavy in my mouth.  I can feel it growing every time I suck hard.  You like when I lick right there, don’t you?  Because I can see your goose bumps.  Your balls are moving up and tightening.  You’re ready to cum now, aren’t you?”  Not only is he feeling what’s going on, but now you’ve given him a visual with his kinesthetic experience.

7.  Look!  No hands!  Let go of his penis completely and pretend you’re a contestant on Fear Factor: Fellatio Edition.  Start by putting your mouth on the base and nibble your way up like it’s an ear of corn.  If it drops, start over. Hold his dick skin between your lips like you’re rolling lipstick (be careful not to pinch him too hard) and “swing” it back and forth.  Slide up as high as you can and down as low as you can without using your hands.  It becomes a challenge to not use your hands to control where his dick goes, especially when it’s hard. But you can display your oral talents without the use of anything but your mouth.

8.  Look!  Both hands!  You have two hands.  Use them!  If you have a free  hand, use it to cup the balls, press down on his prostate area, do something.  I like to use both hands to grab my man’s dick, right hand over left like I’m holding a bat.  Slowly twist your hands in a circular motion, in opposite directions.  Don’t grab tight or else you’ll end giving him an Indian burn.  Finally, put your mouth on his dick head and suck (how much head you can put in your mouth is dependent on the size of your man).  There are many ways to use both hands; the possibilities are endless.

Face fucking is also a stand-alone technique (see article “Face Fucking”) and a favorite of mine.  Remember, face fucking doesn’t necessarily have be done is a submissive position; you can stand, kneel, squat, etc.  Once you become more experienced, you’ll be able to gauge at which points your throat can handle the ramming of an erect dick.

Ball tickler. Using one hand, you will be holding both balls and his penis.  Bend the penis before it gets to hard and arm it up.  Pull and stretch both balls up near his penis head. This will create both balls and the penis head to all be in one area.  You can lick down the middle and lick his head and balls at the exact same time.  If your mouth is big enough (or he is small enough), it might be possible to put both balls and his penis head in your mouth at the same time.  I cannot do this, but it’s definitely possible.   I like to do this especially when Ryan has just shaved his balls.  Fun fact: the skin on the penis and the scrotum are the same.

Frenulum.  The frenulum is the underside of the penis.  Slowly licking the frenulum hits a sensitive spot on a man.

Hickey. This involves sucking your man’s dick very hard as if you’re giving him a hickey.  Hold the sucking tightness and slowly move your mouth off his dick.  The suction should be enough to where you’d leave a hickey if this were to be done on his neck.  It is very intense, so make sure your partner likes this type of sensation.  Sometimes Ryan likes it slow and soft, sometimes he asks me to suck the skin off his cock.

Jugular. This technique is easier to do while his dick isn’t completely hard. To correctly do this technique, you’ll have his dick in your mouth (not necessarily deep toward your throat) while simultaneously licking his balls. As you can imagine, the harder your man is, the harder it would be to do this. And conversely, the smaller his dick is, even when he’s fully erect, the more of his dick will fit in your mouth as you lick his balls.  This is called jugular because he won’t be in your throat, but rather it will “feel” like he’s in your neck.

Pee hole.  This is merely sticking the tip of your tongue as far as you can down his urethra (a.k.a. the pee hole).  It’s a simple and pleasurable technique, for some men.  Some guys may not like the sensation, as my husband has said it feels very  unnatural tp feel tongue slide inside his body.  He loves it, depending on the mood he is in.  Know your man’s penis and his moods.

Washing machine. [A prerequisite to this technique is deepthroating] The washing machine is similar to the woodpecker, but instead of coming up a few inches, you’ll come up as high as you can while keeping his dick in your mouth, then going back all the way down. Do this repeatedly.  When you get really good at this, you will be slamming your nose into his pubic bone, then moving all the way off his dick until you feel his head touch your lips, then sliding it all the way back down again.  As you move up and down, you can also twist your head and put his dick through the spin cycle.  This is a very high-level technique because of the roughness on your throat.  Have fun, find the right angle, and be careful.

If this wasn’t enough for you and you want to see everything there is to know about giving the perfect blow job, read The Blow Job Bible.