I’ve lived in California all my life and had never ventured past the West coast or even anywhere near the Mountain Time Zone. What I knew about the South was what I saw in Forrest Gump and public school history books. Is there still racism? Sure there is. But it seems that the people here aren’t as inhibited as people are in other regions. It took me a while to overcome the language barrier, but even now a little help from Google Translate can help to get fully past the barrier. My observations aren’t meant to mock or offend, but to point out my favorite linguistic distinctions. No, not everyone uses the words and expressions below, to be fair. But many do. Here’s my list:

16. Sair-dee. Say it again. Do you hear it? It’s the phonetic pronunciation of Saturday. Isn’t that adorable? It really tickles me to hear that. No matter what day of the week it is.

15. Chiiiiiiiiiild. Depending on the age of the speaker, you may also hear, “Giiiiiiiiiirl” which is used by your peers, or “Hooooooooooney” which I’ve heard being used between two older women. Therefore, “chiiiiiiiiiild” is usually said by an older woman to a younger person. The drawing out of these terms of endearment usually precedes a piece of advice or a profound fact.

Example: “Why did I get in trouble for eating one piece of chocolate? The new guy ate half the box and the boss didn’t say jack to him!” The supervisor rolls her eyes and says to me, “Chiiiiiiiiiild, he’s the boss’ nephew. You’ll learn soon enough.” 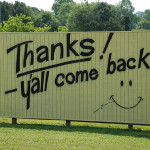 13. Y’all. There is some speculation as to the correct spelling. It’s a contraction for and means just like what it sounds: you all. Whether it’s “ya’ll” or “y’all,” this word seems to epitomize Southern colloquial slang.

Example: I don’t know ‘bout y’all, but that peach cobbler was delicious.

12. Lord Jesus. You’re not praying or addressing our Lord and Savior when you say this. In a nutshell, “Lord Jesus” is taking the Lord’s name in vain. It is. It’s used in the same context as “Heaven, help me!”

I have no idea from where Sweet Brown hails. She may not even be from South, but I wouldn’t be surprised if she is.

11. The good hair. Growing up I’d never heard of good hair. I didn’t know certain people had better hair than others, which is what “good hair” implies. I thought hair was hair. Let me take that back. I did think there were other girls with good hair, but to me it meant bone straight, not having to wake up and take a flat iron to your hair. And so, in fact, I did not have the good hair either.

10. Gym clips. This is a completely new one to me. Even Google directed me to video clips taken in a gymnasium. Good try, Google, but I’m just as confused as you. When a co-worker asked if I had any gym clips and I asked what they were, what followed was a Who’s-On-First routine. “What’s a gym clip?” “You know…those things that you use to hold papers together.” “Oh, right. I got some of those. What size do you need?” “No. I said a gym clip. You don’t know what that is? Let me show you…” And so not only did she answer my question, she now had all the gym clips and paper clips she needed.

9. Caint. Caint is not a blended form of can’t and ain’t, but simply how “can’t” is pronounced by many Southerners. Dialect can vary from different regions of the same state, not just between the uneducated and educated or the urban and the rural.

Example: “I cain’t unnerstan wat y’all mean.” Translation: I can’t understand what you all mean. 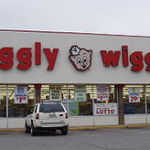 8. Buggy. When you’re doing your weekly grocery shopping at the Piggly Wiggly (I thought it was a fictitious place when I first it on Cheers), you put your groceries in a buggy, or as I call it, a cart. Buggy maybe because it looks like a Volkswagon Beetle? Or Buggy because you push your stuff around in it like a mini car? Or even Buggy cause it’s like a little bug? I’ll never know.

7. Have you heard of Elvis? Ok, this is not an expression. But when you’re obviously not Caucasian, people tend to think you’re from a third world country that can’t afford toothbrushes and high-speed Internet. One day during work, an Elvis Presley song came on. Another worker nearby was singing the words to “Are You Lonesome Tonight,” then turned to me said, “That’s Elvis.” “I know,” I said. “Do they have Elvis in your native country?” This is a true story, I swear to goodness. I politely responded, “Of course we do. The white man brought record players.”

6. Tee-tee. Southern mothers everywhere were not asking their toddlers if they had to go to the bathroom, to go potty, to go tinkle, or to go #1. Hearing “tee-tee” was not the real surprise, but rather how it was said: tay-tay. 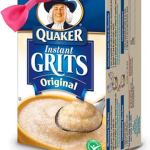 5.  Grits.  This is not the delicious  ground-corn food of Native American origin, that is common in the Southern United States and eaten mainly at breakfast (thanks, Wikipedia). This acronym stands for Girl Raised in the South.  You may have heard of girls being referred to as Georgia Peaches, but I think grits is a neat little term. Either way, I’ve eaten G.R.I.T.S. and grits, and enjoyed both.

4. Bless your heart is equivalent to “Oh, the poor thing,” “That’s awful,” or “I feel so sorry that you’re in such a crappy predicament.”

Example: (me talking to a sweet old lady in line at the Piggly Wiggly) “I can only eat mashed potatoes because I got hit in the jaw by a baseball. Two of my teeth had to be removed and now I can’t do my job as a food critic because I can’t chew.” The sweet old lady puts her hand over her heart and says to me, “Bless your heart!”

3. Do What Now? This is probably my favorite because of its versatility. “Do what now?” is always used as a response to something and can mean:

· “Repeat that?” (“If I survive this hangover, I promise to never drink Jagermeister again.” “Do what now?”)

2. Fixin’ to. Another term known for its multiusage.

· Getting ready to: I’m fixin’ to drive to Applebee’s.

· Going to: What were you fixin’ to say?

· Affirmation of an intended action: “Are you to clean the garage or what?” “I’m fixin’ to. 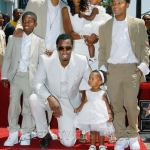 1. Diddy. Not the hip-hop artist who used to ride with Biggie Smalls. You’re thinking of Puff Daddy who would later be known simply as Diddy. In the South, a diddy is the father of a child. Here is a picture of Diddy being a diddy.

Bonus: The question I was asked the most (second only to “Do you speak English?”) is “Are you [a] Chinese?” No. And, no, I’m not Japanese either. No, my mother isn’t African American, but that is not why I got what they call “the good hair.” And just because it’s past my shoulders doesn’t mean I’m Indian either, so stop calling me Pocahontas. I can speak some Spanish, but, no, I’m not Mexican. I feel like a walking ad for the United Colors of Benetton. And I’m glad.

5 thoughts on “My 16 Favorite Southern Expressions and Words”