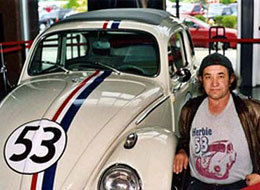 In June 2013, Gerard Streator pleaded guilty to having sex with a couch on the side of a Wisconsin road. I misread this article at first.  I thought he was arrested for having sex on a couch on the side of the road, but no, he was actually having sex with the couch itself.   Maybe this couch is related to a previous couch we’ve written about  (See: The Couch That Eats People)?   The 47-year-old was sentenced to five months in jail after his initial arrest in September 2012, when he was caught “thrusting his pelvic area against the cushions and trying to sexually gratify himself by rubbing his penis between the two cushions,” an officer said.  One has to wonder if it was a full sized couch or a love seat.   I guess it was a full sized couch because apparently Streator didn’t use the defense, “The love seat obviously wears it’s cushions much more provocatively that a normal couch and asked for this type of attention.”  Ah yes, the ol’ love  seat ‘asked for it’ defense.

Also in June 2013, police in Sweden started hunting for a man caught molesting strangers’ bicycles. The man was caught on camera (video link) slashing a tire, lubing up, and then having sex with the bike and slashed tire, owned by Ostersund resident Per Edstrom.   Edstrom wasn’t upset that the man took advantage of his bike; however, he was annoyed that his tire had been slashed.   I’d be more worried about my bicycle being pregnant with a little tricycle.  There are too many fatherless tricycles as is.

In September 2009, William Shaw, 21, takes tree-hugging too literal.  There were claims he was in a local park  with his pants around his ankles having sex with a tree.  Shaw, of Airdrie, Scotland, was released on bail as long as he stayed away from the park.  A neighbor said: “I have seen him about and he seems a quiet lad.” Well, except for the sound of leaves and branches rustling in the night.  He’s just a squirrel trying to get a nut.  And for your viewing pleasure we have added an educational video:  How Pine Cones Are Made.

On May 22, 2013, Ronald Rock, 31, is charged with one misdemeanor count of public lewdness after having sex with a Sear’s employee’s shoe.   Wednesday afternoon, Ronald Rock walked into a Sear’s shoes department supposedly shoe shopping for his mother.  He questioned a Sears’ employee in the shoe section about her shoes and asked if he could hold them.  The Sears employee removed her shoe and watched as Ronald Rock smelled them and then stuffed them down his pants.  A bit of advice, Mr. Rock: you won’t find your sole mate in a shoe department.  Also, I might suggest seeing a doctor… and I don’t mean Dr. Scholl’s.

Edwin Tobergta takes sex on a waterbed to a whole other level. The Ohio man was caught getting his groove on with his neighbor’s pink inflatable raft in September, 2011.  One has to assume that the raft being pink makes it a female raft, so it really isn’t that bad. Reportedly Tobergta begged the neighbor for mercy and said he “has a problem.”  His neighbor turned him in to the authorities anyway.   Rumor has it that the pink raft is now taking self defense classes and visiting with a counselor to help patch things up.

I apologize if we missed your childhood lovers, such as wet loafs of bread, apple pies, pillows, flashlights, stuffed animals, and whatever else you could get your hands on.    Thank goodness I was never caught practicing kissing as a young girl, otherwise I would have really embarrassed my 80’s Nolan Ryan baseball card.   Like a true gentlemen, my Nolan Ryan card never kissed and told.

One thought on “Men Fuck Anything That Walks, Barks, Flies, or Just Sits There Doing Absolutely Nothing”