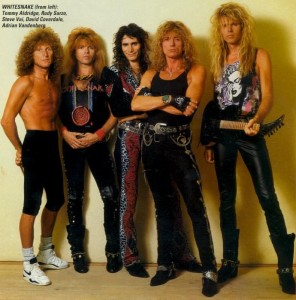 I listen to Pandora at work. A lot. It helps me get through the day not to mention keeping me awake. I recently added an 80s hits station because sometimes I need to do the Carlton in my office to an era-specific type of music. Today, I heard the distinct synthpop intro of Whitesnake’s “Here I Go Again” trickle through tiny mesh metal speakers on my standalone work PC. I quickly hit the thumbs up icon on the track. I love this song.

Being a sweet, awkward child in the 80s was a confusing time for me. I was pummeled with images of Boy George and Human League with their androgenous faces and creamy voices, not knowing if they were deep voiced women or just men who had long hair and lipstick. Do they want to be girls? Pat Benatar and Belinda Carlisle with their boycuts.   Do they want to be boys?  And it really hit home when I saw my carpool lady’s husband with a pierced ear. A pierced ear! My little brain couldn’t take it anymore.

As David Coverdale begins to croon, telling me he don’t know where he’s going, but he sure knows where he’s heading, a feeling of nostalgia begins to whirl in me. I think back to the days of my grade school badassery of wearing a wide-necked striped shirt that slipped off the shoulder just right, probably weighed down my Duran Duran fan buttons. 1982 was a good year, and I was hungry like a wolf cub. But there was something odd going on in me as Whitesnake continued to play, something evoked a feeling of carnal nostalgia. As the song played on, I couldn’t quite put my finger on it, so I looked up the video on YouTube. And that’s when I realized that I had been secretly questioning my sexuality since the days I learned to use two fingers to…make paragraph indents for my book reports.

0:01 – Tawny Kitaen opens with a slow motion cartwheel across the hoods of some muscle vehicles. Smoke drifts across the bottom of the screen. Her white dress, sheer and billowy, flows around her body as her arms as she tumbles gracefully.  Oooooooooh..her panties are showing. They’re not supposed to show panties on TV!

0:12 – First glimpse of David Coverdale. Clearly sounds like a man, but his hair is just fabulous.  Is that his real hair? It looks so high.

0:17 – More long-haired musicians in the background, but obscured by the spotlight behind them. Look at how the guy on the piano flips his hair back!

0:28 – He looks at the girl in the dress in a very serious way: “And I made up my mind.” (He looks really serious. I think he’s going to have a talk with her.) “I ain’t wastin’ no more time, but here I go again.” His lips are very pouty and his hand shakes as he holds the microphone and stares deep into my soul. I think he wants to have sex with me. ( >:O )

0:58 – Look at the control she has as she does the splits on the car. She’s so super sexy.   I’m learning how to do the splits tonight.

I’m going to stop right there because it’s basically more and more of Tawny Kitaen teasing us with her legs under her Stevie Nicks dress and the guys in band licking their guitars. I was so torn!! Although I’d already seen naked women before (I used to go to my friend’s house to watch the Playboy channel when her parents weren’t home) it was still exciting to see glimpses of panties. Why? Because it’s forbidden! The same reason we love tan lines and flashes of skin when we lift our arms up in the air.

Whenever this video came on (back then it was at least half a dozen times a day, before they had reality shows and movies), I’d watch it very closely and just emulate her. I loved everything that she did in the video and believed that I could be sexy and sultry if I did all these things. I thought that if I did, I would be attractive and just perfect. As the years passed, I realized that I wasn’t envious of her, but rather I was envious of David Coverdale. Yes! Every time he touched her leg or kissed her, I imagined what it felt like. I always had an infatuation with women’s bodies. Not my own body, but grown women bodies. I hoped that my body would develop and just be curvy in all the right places.