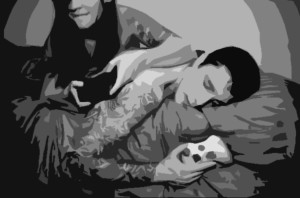 Friendship.  What is a true friendship in a relationship?

That’s the life I want.  I want a friendship were I have no resentment towards the things we do, because I am totally apart of them.  I can’t feel taken advantage of.  I can’t feel like I am only important when I am naked.  I want to have a friendship where we do things together, because we love being together. For me, this makes sense.

Sex with my best friend can never be bad.  Sex with someone I really have nothing in common with and feel totally used by, can be awful.    So my goal for the last few years has been to make sure Ryan and I are best friends.  Everything else falls into place.

For the last year, we started gaming pretty serious in our off time. We’d always been somewhat into video games, but we could rarely find the time to sit down and play anything together. However, we were both 80’s babies, so no matter what we went through in life, or the little amount of free time we had, gaming always remained a small part of us.  In fact, in the first few years of our marriage, we purchased an old Nintendo and played a few classics together.  Super Mario Brothers, Legend of Zelda, Bubble Bobble, Wizard and Warriors, etc.   Eventually, as time passed, we moved onto the Wii and XBox 360.

Although the Xbox 360 and Wii may have had a few long nights with us, those consoles mostly sat under the television collecting dust.

More recently, Ryan started playing on his PC.  At first it was something I was hesitant to do so since I was accustomed to using a console with a controller. But I had  a few time killing games on my cellphone, especially text generated RPG style games that I liked, so I figured I could give the PC a shot too. When Ryan asked me to try a few games with him, I jumped on the opportunity. This is one of those sink or swim moments.  Any chance I get to spend time together, I take it.  That is my rule.  In the past, I may have shrugged off the suggestion, but I don’t want to go back to living with a roommate.  And this isn’t a one way thing, because the old Ryan wouldn’t have really asked me to play with him.  We’re both consciously working towards having hobbies together.

Anyway, we started with a game that allowed us to build, cooperate, and play against other players worldwide (no, not Minecraft — Rust). It was complicated at first. He had to teach me how to use a mouse and keyboard to control my movements, in addition to learning the rules of the game and the best strategies. It was a lot to absorb. I was frustrated at first. I didn’t know how to shoot, how to navigate through the map, and how to successfully create buildings and defend myself. I was so frustrated that I played half-heartedly for the first few weeks. But Ryan was patient with me. I watched him play, picking up a lot of secrets and ways to scheme. That’s where a lot of my frustration came from – being asked to participate in something I had no clue doing.

Eventually, Ryan and I bought a server that we both moderated. We created our own gameplay rules, posted on forums, and advertised our server, welcoming others to try our gaming style. Our rules were unlike the hundreds of other servers hosting this game and we were pretty successful for a little server ran by a husband and wife gaming team. As we became equal gaming entities, we were able to manage our server and still make time for ourselves. Just last night, we gamed for about an hour, I stopped to give Ryan a super intense blowjob ending with a facial, ate dinner, took a 43-minute bubble bath (just enough time to watch one episode of “The Walking Dead” while soaking), then resumed gaming afterwards for another hour. The night ended with me laying on Ryan’s lap in bed and sucking his dick while I played with myself and came in front of him.

That’s a pretty good night if you ask me.

The point of this blog post is not necessarily about gaming. It’s about hobbies and spending time together with your spouse.  If you ask your partner to engage in something that (s)he knows very little about, it’s your job to have patience and provide the tools for success.  If your wife wants to watch the UFC or football games with you, slow down and make sure she understands what is going on.  Even if some of her questions are annoying, be patient.  Trust me, it’s not easy opening up to different things that we’ve ignored our whole life because it didn’t interest us.  Give us a chance to understand what it is our best friend enjoys about certain things.  Some of us ladies would do anything with or for our man / best friend, especially if we didn’t have to worry about the embarrassment of being lost or not being taken serious just because our reasons for being interested are relationship related.  I absolutely love gaming on the PC, probably more than Ryan.  He just had to give me a chance and help me see why it was so enjoyable.  My reasons for starting may have been because I wanted to keep our relationship close, but that’s not my reason anymore.  I don’t play games because it keeps our relationship / friendship strong, I play games because I want to build the greatest base ever and kill any newbie that steps or spawns  near it.

3 thoughts on “A Gaming Couple – Friendship, Hobbies Together, And Sex”