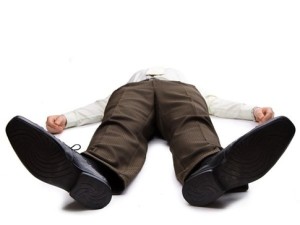 Vasovagal syncope (vay-zoh-VAY-gul SING-kuh-pee) is one of the most common causes of fainting. Vasovagal syncope occurs when your body overreacts to certain triggers, such as the sight of blood or extreme emotional distress.

The vasovagal syncope trigger causes a sudden drop in your heart rate and blood pressure. That leads to reduced blood flow to your brain, which results in a brief loss of consciousness.

Vasovagal syncope is usually harmless and requires no treatment. But it’s possible you may injure yourself during a vasovagal syncope episode. Also, your doctor may recommend tests to rule out more-serious causes of fainting, such as heart disorders.

More information about the vagus nerve:
The vagus nerve (pronounced Vay-gus – meaning ‘wandering’) is a very long nerve that starts running from the central area of your brain, down to and through your chest (around your heart), diaphragm, and ending up in your intestines (core area/solar plexus).

The vagus nerve is part of the parasympathetic nervous system which manages your digestion, relaxation and healing responses and in turn, helps you to control the health of your immune cells, organs and tissues, and even your stem cells. Twenty percent of the fibers of the vagus nerve control the organs which ‘maintain’ your body (the heart, digestion, breathing, endocrine glands). The other 80 percent of its fibers send information from your gut/stomach to your brain; hence it is responsible for transmitting all those ‘Intuitive’ gut feelings and reactions.

One of the key roles that the vagus nerve plays is acting as the cool down and reset button after you have had a stressful experience. A simple action such as taking deep & long breaths after a traumatic experience will physically stimulate the vagus nerve to communicate with the rest of your body to tell you that the threat is gone and that all of your bodily functions can now return to normal, healing mode.

Another recent study found vagus nerve stimulation (VNS) as a treatment for chronic depression in people that didn’t respond to any other treatments. A secondary effect of VNS was weight loss due to the “feeling of fullness” caused by activation of the Vagus nerve, which is the same sensation that is felt after when a full stomach actually puts pressure on the nerve to signal you’ve had enough. Positive results from VNS have also been seen in the treatment of anxiety disorders, Alzheimer’s disease, and fibromyalgia.

So how do we consciously turn up the stimulation on this nerve so that we can benefit from its full effect? Fortunately there are several locations where the vagus nerve comes out to accessible zones for stimulation such as:

1) The center of the chest. Placing your hand over the center of your chest or even the stimulation from an inflated chest full of air (including lower abdominal pressure) will kick in the calming benefits of the vagus after you’ve had a shock. For most of us, this action is actually an instinctual one.

2) The Muscle that constricts the pharynx (the opening at the top of the throat). Constricting the pharynx while breathing in and out through your nose will give your breathing a slightly raspy sound, but will once again start the vagus reflex that will create calming and soothing sensation. For those familiar with chanting ‘OM,’ it is the constriction of the pharynx opening which helps gets you into the transcendental zone.

3) Behind the eye balls. Ever rolled your eyes’ back when trying to remember something? The action of rolling back the eyes actually stimulates deeper thought – another effect of the vagus nerve.

4) Hard and soft palate of the mouth. Those of you who have ever studied Ancient breathing techniques to advance meditative action will be familiar with the pressure from the tip of the tongue against either the floor of the roof of the mouth creating a feedback loop in the vagus nerve that quickly enhances any transcendental state.

5) In the surface of the ear canal and lobe. Vagus nerve ending in the middle and outer ear cause soothing sensation to us. This explains nervous ear tugging, and the use of soothing harmonic frequencies to help us relax & heal better.

Ryan’s response:
It looks to me like both times you ran into a pole you fainted. Just saying.