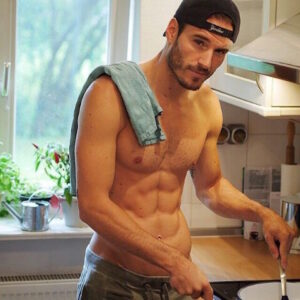 Ryan and I have fetishes. He told me last night that his fetish was sex and that my fetish was food. And it’s true – I love a good meal, always choosing leftovers over fast food. It doesn’t turn me on to gamble with food I pick up through the drive through window. I have too many fast food horror stories, e.g. finding a wasp in my tomato slice (thank you, McDonald’s) and a wadded up napkin in my milkshake (fuck you, Steak n’ Shake). I hate fast food. I wish it would die.

Four days ago he told me that he appreciated me and everything I do for him. This wasn’t a new thing for him to say or for me to hear. I know he appreciates me because he tells me everyday. And he knows that I know because he makes sure I know. This is how Our Circle works – constant reminders to each other, ongoing, never stopping. So, what other way to show his appreciation for me than to promise to cook for me every day? How could I turn that down?! He’s kept his promise to grill for me every Friday for the past 4 years. Every Friday for 4 years has been so much better because I looked forward to his steaks, to spending time with him, and to be spoiled with his kindness and appreciation. I was never a big steak eater, but because he was cooking for me, I found myself becoming a steak connoisseur once a week.

Because I’m on a diet, or rather a “lifestyle change,” I’ve become limited to what I can eat. I’ve cut out sugar, sodas, fried foods – you know, the usual. Ryan being the good husband he is, has again offered to cook for me, and again, I jumped at the chance. It was like Mother’s Day…every day. His inaugural meal was baked salmon with steamed broccoli and steamed asparagus. I talked about it all night – how flavorful his homemade teriyaki marinade was, the perfect balance of firmness of the broccoli florets, the tender crunch of the asparagus spears – and I couldn’t stop raving about it until we went to sleep. But no matter how satisfying it was, what was even better than the food itself was the thought behind it, the preparation, why exactly he was prompted to promise a homemade meal for me for the rest of my life. I love his passion. He said it was equivalent to me showing enthusiasm and excitement when I give him a blowjob. 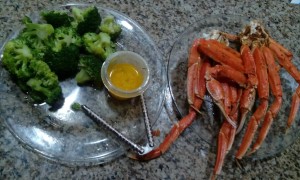 Ryan has surprised me again, with another perfect meal last night. The night before, he said that he was going to make king crab legs, but I wasn’t sure if he was serious. I didn’t think anything of it until I called him after work and he said he was in the seafood department at the grocery store…getting crab legs. I was excited my whole drive home. When I got there he was standing in the kitchen in front of his spice cabinet. He pointed at the counter where a big plate of king crab legs with homemade drawn butter was. It was next to a plate of steamed broccoli. Wow!

I sat on the stool at the counter and just sat for a moment to admire the beauty of it all. I have never eaten crab legs before, but I knew you had to break the legs open to get the meat inside. Ryan offered to help me so he sat beside me for the next 30 minutes carefully separating the delicate meat from the shell while I worked on the torsos of the three crabs. The seasoning stuck to my fingers and the crab meat melted in my mouth. I dipped each piece into the drawn butter as little bits of fresh parsley floated in the liquid heaven mix.

It is such a great feeling to have someone cook for you, especially since I’ve been our family’s chef for so long. Although I love food, the best part of it all is being appreciated. The time, effort, and energy that Ryan puts into making my meals makes me love him even more. I think about how he looks for recipes online and thinks of complimentary sides to go with it. He plans for the best preparation methods that won’t compromise flavor. It gives me an overwhelming sense of pride that I’ve got a husband who finds new ways to invigorate our relationship and who is always working on becoming a better man for me. And it’s moments like this that make me fall even more in love with him when I thought I was already in very deep.

Epilogue – 5 hours after my delectable crab dinner, I began to itch all over my body. At first I thought it was the sweat on my body from when I worked out. Then little welts began to form. To make a long story short, I am allergic to crabs. It wasn’t official before because the last time I had any form of crab was about 10 years ago. Today, my fingers are still a little swollen and feel like they’re “waking up” from being asleep. But damn though…that Ryan’s crabs were so worth the itching afterwards. Cooking And Sex

2 thoughts on “Cooking And Sex”