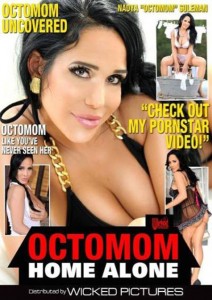 Kudos to the Octomom for putting herself out there for people to see.  I remembered how Kate Gosselin of the TLC channel’s “Jon and Kate Plus Eight” showed her post-pregnancy belly after her sextuplets, but before her tummy tuck.  I remember how her skin was more loose than the average new mom, and with stretchmarks.  Of course this was understandable.  I also remembered how ballsy it was to do that.  Did I expect her to have a flawless body? No. Did I expect Nadya Suleman to look good for being a mother of 14? Of course. She wouldn’t make an adult film if she didn’t.  Did she meet my expectations physically?  She sure did.  To be honest, she looks fabulous.

Nadya Suleman is no different.  After a woman has a baby, her body does not bounce back,  no matter how good her genetics and eating/exercise diet are while pregnant.  A woman has no control over the amount of stretchmarks she gets, how pronounced they are, or even if she gets them at all, regardless of how much cocoa butter you use. Fact. (see NY Times Article ).

Since this was a professionally made video, I expected the quality to be more than a camera mounted on a tripod with her walking into the scene after hitting the record button.  It reminded me of something you’d see on the Playboy channel: mellow jazz or imitation techno music in the background, the camera panning left to right (and vice versa) or top to bottom (and vice versa), and of course, no hardcore sex (yet), just a woman rubbing her vagina and tits in an exotic location.  My oh my – they sure pulled out all the stops, didn’t they? Excellent fodder for someone who’s never seen a naked woman.  However, for the rest of us, this type of video serves merely as curiosity.

What does a woman’s vagina look like after having octuplets?  It looks exactly like a woman’s vagina who has had no babies, because Nadya Suleman had a Caesarean section for those eight children.  I guess the most entertaining thing I’ve seen regarding this film is peoples attitudes towards Nadya Suleman and her vagina after having octuplets.  From the crude  comments of her vagina looks disgusting and used, to rumors of her having plastic surgery to remove her flappy labias they felt she should have had.  It seems that most men, especially the young and sexually uneducated, feel that a woman having a baby magically ruins their vaginas or makes them extremely loose and disgusting.  The fact she had a Caesarean section makes all those comments that much more entertaining.

As far as the film itself, Nadya Suleman looks amazing for a woman that has had 14 children.  Her body looks great, whether it be the implants, tummy tucks, or working out each day watching over her kids, her vagina looks normal, her breasts look amazing, and her face is attractive.   The only other times I have seen her prior to this video was in the tabloids holding her huge stomach during her pregnancy or after she gave birth.  She cleaned up very well.

The entertainment value for me was extremely low.  Personally, I do not get turned on by solo videos.  To those guys, girls, or couples that prefer a nice solo masturbation video, this is one of those.  The fact that she barely moves, does not show her butt at all, doesn’t turn around, and is pretty much stationary other than opening her legs in one scene or dancing funny as hell in the kitchen in another, really takes away from any excitement for me.  The video is filmed very professionally, almost giving all of her nude scenes the old slightly hazed glamour shot look, but I assume that is to cover up the stretch marks or blemishes in her stomach skin.

Okay, that was a bad joke.