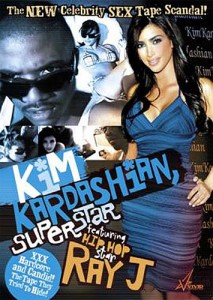 What can you say about this sex tape?  Ray J is an out of date RnB singer and child star that no one really had an interest in seeing make a sex tape.  However, his at the time girlfriend ended up with a vagina that would make her millions.  The sex is awful, Kim Kardashian apparently thinks all you have to do is lay there with a big ass and look pretty.  Being that little Ray J is controlling all the action, it really is just something you watch out of curiosity.

The video that made Kim Kardashian famous.  The video that got her married to Kanye West.  The video that has her posting nudes for magazine covers almost 10 years later.  Other than watching possibly the worst sex ever between two celebrities, you will feel much better about your own bedroom skills. However, you probably aren’t fucking a 100 million dollar pussy.