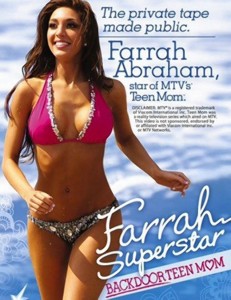 “From Iowa cheerleader to MTV Teen Mom star, midwest beauty Farrah Abraham breaks free with her most daring video ever, Farrah Superstar: Backdoor Teen Mom. Made originally as a personal ‘boudoir’ tape, Farrah decided to release the video to her fans due to overwhelming response once news of the tape became public for download. Shockingly explicit, she takes James Deen as you’d never imagine, in a backdoor scene you’ll never forget. With her tight young body and totally uninhibited sexuality, it’s no wonder why she wanted to capture this moment in time. And now you can too!”

This is what I know about MTV’s “Teen Mom” star, Farrah Abraham: she has mommy issues, she had a boob job during the taping of the show, she proved her deceased former boyfriend was her baby’s daddy, and she cries a whole damn lot and in a very fake, whiny way.  It was for these reasons alone I could not see this sex tape in any other light.  Now that I got that out of the way…

The afternoon sex session is the meat and bones of this sex tape / porn.  Although Farrah has no meat, her slender frame has an amazing ass with amazing breasts to match.  She doesn’t really show much skill giving a blow job, as past sex tape stars have her beat in this area, her open mind to letting James Deen do whatever he wants to her is the selling point here.  She begs for it in the ass before they even start.  It seems as though she was more excited to take his dick in her ass than her pussy or mouth.   She also has no problem going from ass to pussy, which James Deen does numerous times during this film.  She also has no problem going from ass to mouth.  Unless the editing is so slick you miss the time lapse, Farrah Abraham is no holds barred with James Deen.  Of course, the entire scene is filmed like a home video, so the camera picks a spot and until they move the camera, you only see one angle.  They do pick an amazing spot against the wall where you can see Farrah’s legs lifted up, her fat ass showing, and a close up of her squirting while James Deen gives her a proper rumping.  Overall, this is the way a fake sex tape should look.  Ray J, take notes.