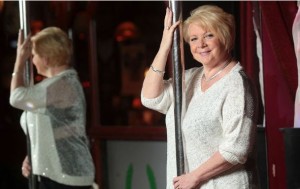 Marie Calvert has slept with over 3,000 men in her lifetime.  I suppose some of you are wondering why that’s even worth mentioning on a sex blog. Well, Marie Calvert, slept with all 3,000 men while she was married.

Ryan: Like with most of our blogs with commentary on certain articles, we are going to respond with different thoughts that cross our mind while reading. Nothing we say is meant to offend anyone or attack a lifestyle.  It’s just our stream of consciousness (in conversation) with no real filter.

Venice: For sure.  As bloggers that blog about everything we try not to judge others…

Venice: The number 3,000 definitely makes my jaw drop, single or married. I guess it’s like the first time I heard that Gene Simmons from Kiss had slept with over 4,000 women in his life time.   To put things in perspective, Gene Simmons is a world famous rock star with women throwing panties at him while he is on stage during his concerts, while Marie Calvert was just an average housewife with kids having sex on the weekends.

Gene Simmons has claimed that he has slept with 4,897 women. The bassist of glam rock band KISS shocks many who believe the “free love” nature of the older rock groups were a bad thing for society. It has also been claimed that another rock star, Mick Jagger slept with more than 4,000 women

For Marie Calvert, she wasn’t a rock star. Instead, she was just a wife who had only had one sex partner for the first 28 years of her life: her husband.

Until the age of 28, I’d only been with him and we had a terrific sex life, but one day he brought home a swingers’ magazine he’d picked up from a workmate. He sort of joked we should try it; I told him not to be daft, and he never mentioned it again.

But I kept looking at the mag and imagining how fun it might be. Eventually I told him we should give it a go. He looked like a kid at Christmas.

Ryan:  The one thing I noticed about a majority of women swinging, most of them claim that before they made that decision to swing and be totally promiscuous, they came from a life where they only had one partner, their husband.  I find this phenomenon interesting.   I am unsure if this is a way to make themselves feel better about their decision, or justify their choices, or they want to give their husbands something no one else can have: their virginity.  To have that “special” moment of, “He was my only lover, before I found 3,000 other men to have sex with.”  “Sex isn’t special, because they can never be my first like you were.”  Either way, a lot of women swinging claim to only have one partner prior to deciding to have sex with multiple partners. I believe it’s a swinger’s psychological way to neutralize any preconceived notions others may have about their lifestyle.  “Don’t judge me, I used to be an absolute angel for half of my life!”  As much as people in the lifestyle pretend not to care what others think, they care.  We all care about what other people think about us.  95% of swingers are totally in the closet about their lifestyle and would die if anyone found out they shared lovers or let their spouses have sex with other people.  Once they are out of the closet, they still hold on to certain ideas that they feel “saves face.”  Being a swinger that only had sex with one man before she decided to swing, seems to be every swinging wife’s story.

Ryan: I’m an introvert, it’s what we do.

Venice: Well, swingers aren’t the only ones that do this. Everyday couples in love tend to erase their pasts and claim each other as their firsts.  It’s a show of loyalty and respect.  Like, anyone before us really didn’t matter.  It’s also a good story for their children to hear.

Marie suggests later in her article that although she has had many partners, she never put sex on a pedestal.   Learning to separate sex as a physical act, from making love, was the key to successfully sleeping with over 3000 men, all while being married to her husband.

Barry and I have been together since I was 15 – we wed when I was 19, have two grandchildren, and he’s my world. But neither of us puts sex on a pedestal. We see it for what it is: separate from love. It’s not natural to stick with one sexual partner for 60 years. Life is about experimenting and experiencing, and that’s what we do.

Venice: Excessive to say the least.

Swinging and sex became like a hobby for the couple.  Like some couples would enjoy camping or hiking on the weekends, Marie and her husband would meet up with couples and have sex together.

We became committed swingers, spending weekends meeting up with couples or going to parties to swap partners. Suddenly everything was exciting. You’d be at work, and you’d think about what you were up to that evening and it sent a shiver down your spine. Some couples – like John and his wife – would become close friends, even when the sex stopped. Others you’d see only once.

Sex not only was something she did for fun, but she did it so much she felt like it was equivalent to exercising her body.

The night I slept with 14 men was at a swingers’ party in Manchester. I remember driving there feeling almost uncontrollably lustful. The next day I felt achy, in that lovely way, like when you’ve been to the gym.

Venice: Hilarious.  I feel that sometimes with just one guy, I’d say 14 guys would be like having a barbell dropped inside your vagina.

Ryan: That’s why you should always use a spotter.

After years of swinging for their own enjoyment, eventually swinging and sex became a business.

In 1997, we decided to open a swingers’ club in Sheffield. We were fed up with work and wanted to do something we were passionate about. It’s still thriving today. We never have sex during opening hours – it’s our business and we’re professional about it. But, of course, when the place shuts, we’ve got an entire club full of facilities – and an ever-growing circle of open-minded couples – to play with.

Venice: Sex can be emotionless, as far as liking a person or falling in love goes, but while you are having sex there is absolutely a connection that is beyond physical. Even the memories of certain experiences last forever, which obviously isn’t physical.

Ryan: The logic behind these ideas do not make sense to me.  And I say that even after you’ve let me physically connect with women while we were married, so I need excuses.   I do feel my experiences were just physical, but I would only get erections if I felt desired and wanted.  I would lose my erection because I was disinterested with no emotional connection.   And the memories of our experiences with others still turn me on more than the actual experiences themselves.  I like the memories, so there is absolutely more to all this than, “Sex is physical and that’s it.”

Venice: Everyone is different Ryan.  I think sleeping with 3,000 men is very extreme, but if her and her husband are still happily married, who are we to judge whether or not it’s excuses or just how they feel?