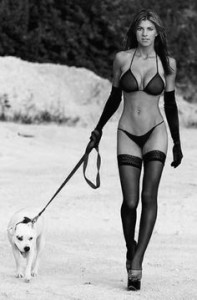 Venice’s response to sex with dogs
Wow, what a way to end the year.  My only suggestion is to be open with your wife about your concerns and communicate your thoughts. If you have been married for 12 years, you shouldn’t have a problem telling her what is on your mind. If she has openly talked about her friends experiences with animals while she watched, she obviously isn’t shy when it comes to talking about kinky things. Truthfully, I don’t see too much of a difference between a friend having sex with a dog, and watching a friend have sex with a dog. Most people wouldn’t have sex with a dog, but they also would never watch a friend have sex with a dog either. They are both pretty extreme.  It seems your love for your wife made you totally ignore the idea that your wife sat there and watched another woman get fucked by a dog. If it turns out that her story about her friend is true, it may be the catalyst to your wife’s kink. Sometimes being introduced to something can lead to the brain accepting it and being turned on by it. Not sometimes, that’s almost always how new kinks are introduced to a person.  She also may not be telling the whole story. I wouldn’t doubt that they both may have participated together and she just told you part of the story to judge your reaction.  If your wife does have this kink, I really do not have any advice for that. I promote being accepting and open with your spouse, but some kinks are better left fantasies. I’d go as far as saying, buy an anal plug with a tail attached, paint your penis bright pink, and dress up as a fury. This is okay. But having sex with animals just isn’t healthy for the body or mind. Even your comments about her UTI/Kidney infection raises red flags. This could be from her kinks of sticking uncleanly things up her vagina (such as a dog penis, dog bone, and who knows what else).

Ryan’s response to sex with dogs
The good news is, Labradoodles are small dogs, so no matter what she is into, she isn’t a size queen.  If she would have asked you to buy her a Great Dane, I wouldn’t have anything comforting to offer you. If your story / question is real, I’d say she was testing the waters with the story about her friend just to see your reaction. If you were open about it, she would have asked you to watch or possibly join her. I think your reaction was appropriate and her kink has remained in the closet.  Where it should be.  The truth is, some fetishes shouldn’t be more than just fantasies.  I don’t think pedophiliacs, necrophiliacs, zoophiliacs, or any other fetish that involves someone that isn’t old enough or is just outright unable to consent should be embraced. I cannot give advice on how to handle this situation if your wife does come clean, as I assume it would be too embarrassing to seek professional help.  I suppose being supportive, maybe even letting her know that you understand why it’s naughty and kinky, but some urges need to be controlled, like sex with dogs, because it’s just not healthy (or legal).

6 thoughts on “Q&A: Is My Wife Into Having Sex With Dogs? (Puppy Love)”