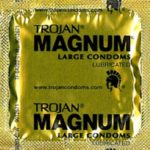 If by the time this blog comes out and I a missing, just know the illuminati of average sized men that all buy Magnum condoms got me.

When Magnum condoms were first introduced to the world, I was young and told myself, “So yea, pretty much I will never have the need for those.”  Although I hadn’t had sex, I did buy a condom from a dispenser once and tried it on just to see what it was like.  Truthfully, this was probably the first time I realized I had a normal penis and told myself, “Hey, my penis must be normal because this fits fine.”  I just assumed the gold wrapper was for those chosen few.  And remember, in the 90s, all condoms came in silver or white wrappers.