A great article by Daniel Engber of slate.com regarding the monogamous or polygamous nature of humans.  Read below: 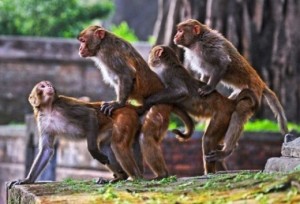 What makes us different from all the other animals? Is it our swollen brains, our idle hands, or perhaps our limber thumbs? In 2011, a research team reviewed the quirks of human DNA and came across another oddly shaped appendage that makes us who we are: I mean, of course, man’s smooth and spineless member. The penises of lots of mammals are endowed with “horny papillae,” hardened bumps or spikes that sometimes look like rows of studs on a fancy condom. These papillae enhance sensation, or so it has been claimed, and shorten a mating male’s delay to climax. Since humans lost their phallic bumps several million years ago, it could be that we evolved to take it slow. And it could also be the case that longer-lasting sex produced more intimate relationships.

So (one might argue that) the shedding of our penis spines gave rise to love and marriage, and (one could also say that) our tendency to mate in pairs pushed aside the need for macho competition, which in turn gave us the chance to live together in large and peaceful groups. Life in groups has surely had its perks, not least of which is that it led to bigger brains and a faculty for language, and perhaps a bunch of traits that served to civilize and tame us. And so we’ve gone from horny papillae to faithful partners—from polygamy to monogamous humanity.

I like this story well enough, but it may or may not be true. In fact, not all penis spines in nature serve to quicken sex—orangutans have fancy ones but waste a quarter of an hour in the act—so we don’t know what to make of our papillae or the lack thereof. That won’t stop anyone from wondering.

Since we like to think that how we mate defines us, the sex lives of ancient hominids have for many years been examined in computer simulations, by measuring the circumferences of ancient bones, and by applying the rules of evolution and economics. But to understand the contentious field of paleo-sexology, one must first address the question of how we mate today, and how we’ve mated in the recent past. 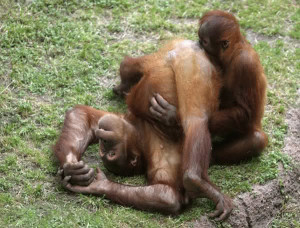 According to anthropologists, only 1 in 6 societies enforces monogamy as a rule. There’s evidence of one-man-one-woman institutions as far back as Hammurabi’s Code; it seems the practice was further codified in ancient Greece and Rome. But even then, the human commitment to fidelity had its limits: Formal concubines were frowned upon, but slaves of either sex were fair game for extramarital affairs. The historian Walter Scheidel describes this Greco-Roman practice as polygynous monogamy—a kind of halfsy moral stance on promiscuity. Today’s Judeo-Christian culture has not shed this propensity to cheat. (If there weren’t any hanky-panky, we wouldn’t need the seventh commandment.)

In The Myth of Monogamy, evolutionary psychologists David P. Barash and Judith Eve Lipton say we’re not the only pair-bonding species that likes to sleep around. Even among the animals that have long been known as faithful types—nesting birds, etc.—not too many stay exclusive. Most dally. “There are a few species that are monogamous,” says Barash. “The fat-tailed dwarf lemur. The Malagasy giant jumping rat. You’ve got to look in the nooks and crannies to find them, though.” Like so many other animals, human beings aren’t really that monogamous. Better to say, we’re monogamish.

That –ish has caused no end of trouble, for lovers and for scientists. Efforts to define our sexual behavior often run afoul of humans’ in-between-ness. Take one common proxy measure of how a primate species copulates: testis size. A male that’s forced to share its partners might do well to make each ejaculation count by firing off as many sperm as possible. Chimpanzees mate rather freely and show a high degree of male-male competition. They also have giant balls, for blowing away their rivals’. Gorillas, on the other hand, have their sexual dynamics more worked out: The alpha male has all the sex; the other males are screwed. Since there’s less chance of going head-to-head on ejaculations, tesis size isn’t so important. Gorilla balls are pretty small. And what about a man’s testes? They’re not so big and not so little. They’re just eh.

Male gorillas may not one-up each other with their testes, but they do rely on other traits to get and keep their harems. That’s why male gorillas are so huge and fearsome: so they can fight off other males for social dominance. Within a species, the difference between the male and female body type yields another proxy for mating habits: The bigger the gap in body size, the more competitive the males, and the greater the inclination toward polygynous arrangements. So how does the split between human men and women compare to that of other primates? We’re sort of in the middle. 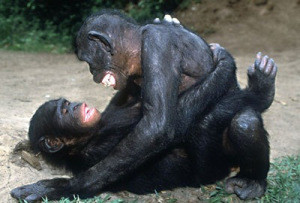 Seeing as we’re neither one thing nor the other, scientists have been left to speculate on how our ancestors might have done their thing. Were they like gorillas, where most males suffered while one dude enjoyed the chance to spread his seed? Or more like chimpanzees—sleeping around, with males competing for multiple partners? Or is there another possibility, like the one championed by Christopher Ryan and Cacilda Jethá in their best-selling and soundlycriticized paean to free love, Sex at Dawn? According to that book’s authors, our ancestors did as bonobos do: They had rampant sex without much bickering.

Such discussions tend to dead-end quickly, though, since we just don’t know for sure. Our most recent relatives in common with these other primates lived about 6 million years ago. (I suppose if bonobos could be anthropologists, one of them might write a book on whether bonobo sexuality evolved from something humanlike.) “What this really is,” says Barash, “is a Rorschach test for the people asking the question.”

We do have data on human mating trends, but the record tends to be a little spotty. In 2010, a team in Montreal completed its analysis of breeding ratios for Homo sapiens based on a careful study of DNA. By measuring diversity in the human chromosomes, the researchers tried to figure out what proportion of the breeding pool has been composed of females. They found a ratio of slightly more than one-to-one, meaning that there were at least 11 ladies for every minyan of procreating men. But the math they used turned out to be a little wonky, and after making some corrections, they revised the numbers up a bit toward a ratio of 2. These estimates, they wrote, are still within the range you’d find for societies described as “monogamous or serially monogamous, although they also overlap with those characterizing polygyny.” Once again—we’re monogamish. 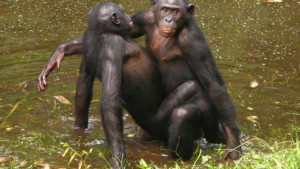 At what point in hominid evolution did this in-between behavior appear? Paleontologist Owen Lovejoy published fossil specimens in 2009 from Ardipithecus ramidus, which lived 4.4 million years ago. He used the newly described species as evidence for the hominids’ great transition to (mostly) one-on-one relationships. Ardiwalked on two legs, which freed its hands for carrying food, and males that carried food, he says, were thus enabled to take that food to females. They’d evolved a way to pitch woo and bring home the bacon. By this stage in evolution, sexual dimorphism had been diminished, too, and so had other signs of male-on-male competition. Taken together, Lovejoy wrote in Science, these data points suggest “a major shift in life-history strategy [that] transformed the social structure of early hominids.” Males and females had started pairing off, and dads learned how to support their families.

A computation-minded researcher at the University of Tennessee, Sergey Gavrilets, finished up a study in May of how that transition might have followed the laws of natural selection. It’s not an easy puzzle. Gavrilets explains that a polygynous mating scheme can lead to a “vicious circle” where males waste their time and energy in fighting over females. The group might be better off if everyone split off into happy, hetero-pairs and worked on caring for their babies. But once you’ve started wars for sex, there’s an evolutionary push to keep them going. So Gavrilets set up a computer model to see if any movement toward monogamy might conform to what we know of evolution. He found that a shift in female preference for mates that offer food and child care could have made it happen. (Low-ranked males might also favor relationships with partners that didn’t cheat.)

Gavrilets says he needs to check his model against a few more theories of how human-style partnerships evolved—including one that involves the invention of cooked food. But he’s made the case, at least, that biology could lead to modern love, without any help from law or custom. “Culture came much later,” he told a reporter in the spring, “and only augmented things that were already in place.”

That’s one idea, but the study of monogamy takes all kinds. Others have been more interested in the culture and the customs. In January, a scholar named Joe Henrich published with his colleagues an account of how and why the one-partner system might have spread as a social norm. The paper points out that marriage customs are not the same as mating strategies. (They are related, though: We tend to internalize the rules of the society we live in, so “doing right” becomes its own reward.) The authors argue that when a society gets big enough and sufficiently complex, it’s advantageous for its culture to promote monogamy, or at least monogamishness. 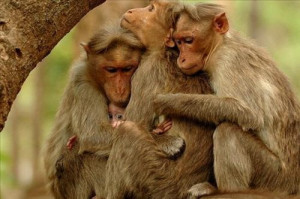 Why? Because polygamy causes problems. Henrich, et al., review a large amount of evidence to support the claim that the multiwife approach leaves lots of men unmarried and so inclined to act in risky, angry ways. These bachelors are a menace: They increase the rates of crime and conflict, and lower productivity. In China, for example, a preference for male babies skewed the gender ratio quite dramatically from 1988 to 2004. In that time, the number of unmarried men nearly doubled, and so did crime. In India, murder rates track with male-to-female ratios across the country’s states. Using these and other data, the authors argue that a culture of monogamy would tend to grow and thrive. It would be the fittest in its niche.

Of course it’s also possible that high rates of conflict lead to cases of polygamy. Walter Scheidel points out that the ancient ban on multimarriage was suspended near the end of the Peloponnesian War, with so many soldiers dead that potential husbands were in short supply. Which raises the tricky question of how monogamy relates to war: Some have argued that pair-bonding leads to larger, stronger armies and more battle-ready people. Henrich, et al., suggest the opposite, that men with wives are less inclined to go to war, which weakens despots and promotes democracy.

The answer may be something in the middle, as it often is when it comes to the science of monogamy. Some cultures have made the practice into law and others haven’t. Even our human physiology seems undecided on the issue. At every level of analysis, it’s hard to say exactly what we are or how we live. We’re faithful and we’re not. We’re lovers and we’re cheaters.