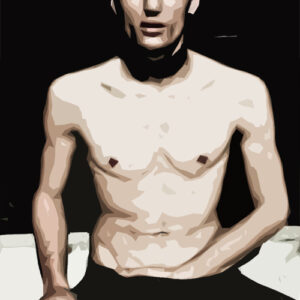 My husband often wears only boxers when he’s at home and he has this habit of constantly touching himself.  Some of the time when I look at him, his penis is actually erect or semi erect.  I am unsure if he is masturbating, turning himself on, or just constantly itching his penis.  It seems like he is always scratching, fondling, or rubbing his own testicles.  Even when we are snuggling in bed and I’m laying against him, I can feel him touching himself.  It didn’t use to bother me but over time it is really becoming a problem.  I do not want to see my husband as some guy that sits around the house touching his penis all day.

Is it always sexual? Or do some guys just like to play with their stuff?   I don’t know whether to be jealous, turned off, or just ignore it.

Venice’s response:
Seems like this is something that a lot of guys do. I remember seeing Al Bundy put his hand in his pant waist when I was a kid in every episode of “Married…with Children.”  It was weird to me and I always thought, “Why is he touching his penis?” Looking back at it now, he was not touching his penis. But I was a kid and it was soft core porn-ish to me.  But let’s think about it: middle-aged man who had a crummy job, sassy kids, and a wife who nagged him. All these things could be stressors in his life. And although he’s not physically touching his dick, I really believe it’s a symbolic gesture of what your husband does at home: constant touching of his penis.

And guess what: I do it, too. Sometimes my hand will wander until they get beneath my panties and before I know it, I’m feeling myself up. I’ll lay in bed and touch my lips. I feel my skin. I’ll squeeze my lips between my fingers up and down. I’ll tickle the crease of my thigh. I’ll rub my pussy hole without sticking my fingers. And I rub my clit.  I’m not doing it to orgasm at all. I may not even get to the point where I am so turned on that I WANT to cum. I do it simply to relax, and it just feels so damn good.

Do I think what your husband does is to be perverted? No. He’s not doing it in front of open window or in front of your friends.  Is he doing it to ejaculate?  It certainly doesn’t sound like it. Does he think what he does is wrong? I don’t think so; he’s obviously not trying to hide it from you.  He’s in his own home.  Frankly, I consider it very normal.  I see it as a positive thing if your husband is comfortable enough around you to not be judged for something that others could see as perverted or weird. We all have strange habits and the one person who should embrace them is your spouse.

But how is it a problem to you? As long as he doesn’t do it in public, it should not be a problem. And don’t ignore it because he’ll never stop. It’s pointless to ask him to. He’ll resent you and will eventually do it behind your back.  You definitely do not want that. My solution: do it for him! The next time you’re in bed together and you see his hand down his boxers, put your hand down there with his. Feel what he does, learn what he does to himself, be a part of his semi-sexual routine. I promise you, he won’t turn you down.

Ryan’s response:
Some guys definitely like to play with their stuff.  Everyone is different though.  If a man lives his life trying to be absolutely perfect to his spouse, hoping she never sees any of his bad habits, he may run to the bathroom to pick his nose or go into a closet to privately adjust his junk.  I used to be that way about everything until I met Venice.  I think it’s a comfort thing.  If you find someone you really love, you end up totally being yourself around them.  Unfortunately this means the person you love ends up being annoyed by your habits.   There is such a thing as too comfortable.

It’s hard work living together everyday and still staying totally in love.    How does one pick his nose, fart, burp, use the bathroom, have bad morning breath, rub his testicles, and accidently have long nose or ear hairs and still keep a woman attracted to him?  It’s tough.  As much as I’ve tried throughout the years, I am still human.  As we get more comfortable and our spouse becomes an extension of us, it’s hard to keep anything from them… including the bad.  This is why communication is so important.  I literally have conversations with Venice where I explain that I have to embrace some of her flaws, the same way a guy who is scared to step on cracks in the sidewalk needs to FORCE himself to step on those cracks to embrace his fears, so I don’t start getting turned off.   I tell her this hoping she does the same for me.  If you focus on the bad, it snowballs into horrible.  If you focus on the good, it snowballs into a great relationship.  For instance, if we both focus on our bad morning breath, eventually we’d never want to kiss.  Whether we clean our teeth or not, eventually the bad morning breath snowballs into disgusting mouths, which then snowballs into no kissing, which then snowballs into less intimacy, which then snowballs into not kissing your spouse in years.  This HAPPENS.  So instead, we will brush and kiss each morning and after we spend lunch together.  Please see the 5 second kiss rule.

Now, I said all that, just to say this.  I do actually catch myself touching myself.  I think it may be a comfort thing.  Like, the whole world sees me as this person that wakes up, showers, gets dressed, and goes to work.   But, at home, I am so comfortable with my wife that sometimes I will lay in bed and talk to her as I touch myself.  Not in a sexual way, not in an erection way, but more of a squeeze the head of my penis and get this relaxing chemical release.  There is absolutely no sexual arousal at all.  It relaxes me.  Why?  I have no idea.

If your husband is getting an erection, I am unsure exactly what he is feeling.  It seems like it may be partially sexual.  Talk with him about that.

I do think rubbing his balls would annoy most people.  It’s not like a man’s testicles are the cleanest part of our bodies, and if he is just rubbing them all night and touching the light switch, computer keyboard, or remote control, I would be annoyed as hell.  Or just grosssed out.  Talk to him about it and let him know he may be comfortable doing it in front of you, but you are not comfortable with seeing it.

Ignore it or annoyed, you feel what you feel.  However, I really don’t see a reason to be jealous.   Are you afraid he may leave you for his hand?   Talk to him.