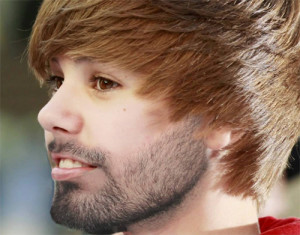 She is really upset and hates my new beard.  She has said something to me a number of times about wanting me to shave. So I asked her are you going to shave for me? Of course, she says no. I don’t know if I’m to shave soon or decide to fuck it and see if I can get her to see my side on this. She says it hurts when she shaves when it grows back in. Well, my face doesn’t exactly feel awesome when I have to shave daily or close to daily either.

What do you guys think?

Venice’s response:
Shaving for the first time will cause a lot of irritation. That’s a fact. Whether you’re 18-years-old and shaving for the first time because all the girls in your sorority are doing it or you’re a regular shaver and you’re shaving for the firs time in weeks. It will itch like crazy, your skin will be irritated, and it may even get raw from the excessive scratching you may do in the ensuing days. But I do feel that once she does shave a few times, she will get used to it. And if she shaves at least twice a week to maintain its baldness, her skin will get more “calloused” and will grow accustomed to the shaving. It will stop itching, and unless she cuts herself, the stinging sensation is only temporary, just like a man who shaves his face.

In my opinion, I believe men and women should at least make an attempt to do what his/her partner asks of them. Why be so close minded? How does that positively affect the relationship by saying no? It shows you’re stubborn, it shows you’re selfish, and most of all, it shows you’re not willing to make the other person happy. The first time Ryan asked to ejaculate on my face, I was pretty scared. Why? Because some had gotten in my eye and it was just a bad experience for me. But after I got over it, and rather than thinking of the negative aspects, I thought about how I’d be pleasing him, how it would turn him on, how it would make him love me just a little more (yes, it’s possible even if he says “I love you with all my heart”), and how I’d be fulfilling a fantasy of his. Me. He could see other chicks do it and say, “Just like how my woman does it, but it’s better because it’s her.” How can I ever tell him no to anything when I’m the one he wants to do these things to?

In your case, it seems like you want to turn this into a tug-of-war by saying “My face doesn’t exactly feel awesome when I have to shave daily.” Pretty juvenile. If neither of you will comply with the other’s wishes, then neither of you should complain.

Ryan’s response:
I imagine in a few months you will be looking like Forrest Gump when he was running the map.  And your wife’s vagina will also still be a glorious forest of love.

I think what you are doing is silly.  Communicate with your wife and let her know how important it is that she shaves.  If she has her reasons why she doesn’t want to shave, and they are sincere, then you will just have to accept those reasons and take into consideration the type of person you chose to spend the rest of your life with. What you are doing isn’t sincere, that’s the difference. You are not shaving because you want to teach her a lesson.  She is not shaving because it hurts and makes her feel uncomfortable.  Big difference. Your not shaving is out of spite, and in my opinion, a very immature way to get your point across.

I do tend to agree that your spouse should naturally do things that make you happy though.  For instance, waking up and fixing her hair may not be the funnest thing in the world to do.  In fact, I am sure everyone would like 5 more minutes of sleep.  Not to mention, I am sure her hair may snag and feel comfortable until she gets the kinks out, but she still does it.  She does this to make herself presentable and decent to the world.  Whether it be makeup, high heels, thongs, or anything women do that isn’t necessarily comfortable, just to make themselves look good and feel sexy.  Why wouldn’t she put up with a little discomfort if it makes you happy?

I find it lazy and selfish to ignore the small things you would appreciate her doing, but that still doesn’t change the fact that you not shaving out of spite isn’t the way to “teach her a lesson.”  She isn’t a dog or lab rat.  Your marriage shouldn’t resemble a psychology lesson. Communicate with her and let her know how important her shaving is for you.  If she decides she doesn’t care, then you know what type of person you are spending the rest of your life with.   Not that her jungle below is enough to file for divorce over, but the small red flags of selfish behavior definitely snowball into problems in the future.