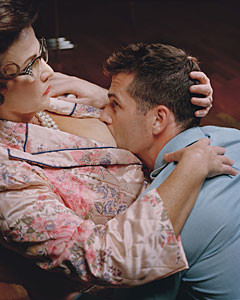 Hi guys! Me and my boyfriend are fairly young, early twenties, and we haven’t been dating super long, but we have both discussed marriage and being together for the long haul! We both know what we want out of life, and we know that we love each other. However, there is one problem and I’m not exactly sure how to deal with it…he is very close with his mother due to the fact that he is all she has. Her parents have passed and she has no siblings or any other children. Recently he told me that his mother would always come first to him, and I understand wanting to be there for her, but I don’t think that’s necessarily fair when it comes to my relationship with him. He says that I need to be okay with her going on vacations with us, but I think I deserve my own time. I love his mom, she’s probably one of the sweetest ladies I’ve ever met, but still, it can get annoying since he tells her everything and they talk daily. I guess what I’m trying to ask is: am I being selfish for wanting him to put me as a top priority in his life and put me first sometimes?

Venice’s response:
What a good son for looking out for his mother. She’s very lucky to have a son who worries for his mother’s well-being. With that being said, I definitely do not think you’re being selfish for wanting to be top priority. It’s natural people in a budding relationship to want to be with each other as much as possible. It’s part of the bonding process. It helps establish a couple’s places in the relationship. It’s a test to see how the other reacts to stressors in the relationship, i.e. needy mothers.

Additionally, your boyfriend needs to realize that it is YOU that he will one day marry, not his mother. I understand his love for her and her current state of loneliness, but he must learn to balance his time between you and her. Not only that, but she needs to stop relying on her son for emotional support. He is his own man now which means that he has to learn to make decisions that will keep everyone happy and satisfied. Being in a relationship is hard work and whether she knows it or not, her intruding on his relationship can potentially do a lot of damage just by preventing him from spending time with you. When Ryan and I were still dating, he let me know..no, he showed me that I was his top priority. Even when we were separated by distance, we ensured that our relationship and our happiness took precedence. We made sure that we talked every single day, whether it was by text or by telephone, most of the time it was both. I sent him care packages, and he visited while he was on break from school. He even missed his first first nephew’s baby christening because he didn’t want to miss my phone call. To be fair, I didn’t ask him to. But maybe Ryan can shed some light on that…

As far as him telling her everything…um, why does he do that? The occasional motherly advice is warranted, yes. But he should really consider keeping his love life personal. Allowing her to know the little details of your relationship keeps you both under the microscope. Nip that in the bud FAST. Years from now, I’d hate to hear, “Do you still have a problem with climaxing with the light on? Did he tell you what I suggested to him?” GOD.

You can suggest to your boyfriend to take his mother out once or twice a week (a movie, lunch, shopping, etc.), maybe during a time when you’re at work, school, or when you’re out with your own friends. He doesn’t need to spend all of his free time with her. Quality, not quantity, will make her appreciative of him. Sabotaging his relationships is NOT in her best interest. It will lead to one failed relationship (if not marriage) after another, then he will never have kids, which will lead to the destruction of their blood line. And even though that is a hypothetical/worst case scenario, you could see that mothers aren’t mean to be part of the relationship equation.

Ryan’s response:
No, you are not being selfish for wanting him to put you first.  His mother will always be important in his life but a wife should always be first.  As of now you aren’t his wife so maybe that’s the issue.  However, if he has asked you to marry him then he needs to know you come first.  You are the only person in his life that he will ever “pick” to be with him forever. You need to be compatible.  Your personalities need to fit.  You’ve got to be his top priority because you are the only person in his life that isn’t bonded by blood.  In other words, your relationship is only permanent because of a promise (or court document).  His mother, his family, and his future children were all put in his life (or will be put in his life) without him really having a choice if he will be compatible. Whether he likes their personalities or not, they will be in his life forever.  You are the one person he has to keep happy and be happy with, otherwise the relationship can dissolve. Therefore, a wife should always be the number one priority in a man’s life.  I know it sounds bad that I mention he should even put you above his future children, but the point is, his (your) children will eventually reach 18, move on, have their own families (wives/husbands that they will also need to put their mothers/fathers), and he will still be with you.  Your marriage goal should be to grow old together, without compromising your own happiness.

With that being said, my answer depends on whether or not your boyfriend really wants to marry you.