Venice read over the article and added her own commentary where she felt it was needed prior to publishing. 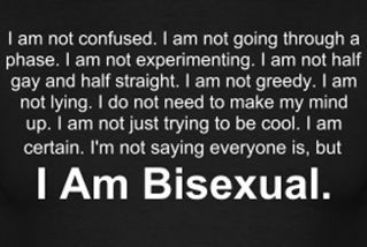 Is my wife bisexual?

Think about this question for a minute. Do all men at some point ask this question about their wives? If you didn’t know anything about our blog and what we have been through, what would come to your mind first when you see me ask that question?

The first thing I’d think is that the husband is probably curious about the way his wife is behaving. I know for me, I’ve always wondered about Venice’s sexual preference. I knew her best friend was a lesbian and living with another girl, I knew she really enjoyed watching lesbian videos, and I always felt her personality made her feel like a best friend, not a girl friend. She didn’t wear make up, didn’t spend much time fixing her hair, and she could out “joke” me. She just didn’t feel like your everyday girl. At least, not one I had ever dated. However, she always told me that her best friend wasn’t “out” when they were in high school and the video thing is more of being ‘turned on’ by something she knows she would never do. As far as her personality goes, she said I should stop overanalyzing it.

What are some other reasons husbands may ask this question though? Maybe they caught their wives sizing up other girls or they are openly flirty around other women. Maybe the question is less of a question and more of wishful thinking. It’s not uncommon to ask a question that really isn’t a question, instead it’s just a method used to push an issue or agenda (like this article you’re reading now). It’s not unheard of that a man would actually enjoy his wife being bisexual. In fact, I’d think most men would find out that information and immediately think they could either watch their wife play with another woman or actively participate in a threesome. This is probably why most women are hesitant to ever openly admit they are bisexual. Unlike men, our society doesn’t have a negative stigma associated with women being bisexual. It isn’t a flaw or a sign of weakness. So why would a woman ever keep being bisexual a secret? Well, for one, she just isn’t interested in her man thinking he can have another woman. She’d rather never explore her bisexual side, or explore her bisexual side secretly without including her husband. And unfortunately, this sometimes leads to a woman cheating on her husband with another couple, simply to experience a threesome while keeping her own husband to herself. That sounds crazy huh? How can a woman like women, sometimes even having an affair with a woman and the other woman’s husband, but never come out to her own husband? Embarrassment, jealousy, possession, and lack of trust.