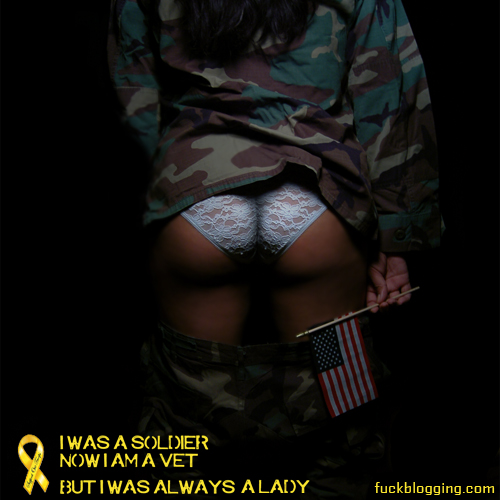 Serving in the U.S. military as an office for 11 years, I have decided to upload a gallery dedicated to the men and women warriors, past and present, who serve(d) their country.  At first, I saw a tweet from @women4warriors asking for women to send panty pictures of themselves so they can retweet for the men serving their country.  I thought this was a great idea, especially since I have my old BDUs (camouflage) and uniforms still lying around (I even found a flak jacket and gas mask – but that probably wouldn’t be a good look).  Hopefully the lady warriors get a little bit from my pictures as well, as there are also a lot of beautiful women serving our country.  Rather than just showing my pussy with a flag stuffed in it, or shooting a cell phone shot of my asshole for soldiers to gawk at, I will try to give a little eye candy to the women as well.  As a woman who is also open-minded and bi-curious, I’d prefer my eye candy to be a bit less raunchy.

I will save the raunchy stuff for my other galleries, haha.

I am withholding which branch I served in because let’s face it, there aren’t too many females of my ethnicity(ies) who were in the military.  After graduating college I went straight in.  Even more, I served during wartime.  You know those stories of soldiers who have been approached by strangers thanking them for “what they do”?  That’s real.  It happened to me: in the doctor’s office, at the grocery store, at the bank – you name it.  As long as I was in uniform people were drawn to the pride, safety, security, loyalty, and patriotism I represented.  A small, and a lot of times scared Asian woman, dressed up in heavy BDUs and a gas mask, preparing for the worst. Even though I was a soldier ready and willing to die for my country, I was still a lady on the inside.

We will be adding more to the gallery as we take new shots.

Sexy Women In the Military – OUR PHOTO GALLERY BELOW.