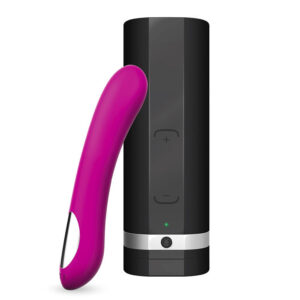 First, let’s start off by saying this is one of the coolest ideas we have ever heard of; however, technology just may not be able to keep up yet.  We will split this review up into both of our opinions since it is two separate toys that work together via Bluetooth.  Before we get into the review of the actual product, let’s make sure we give a big thank you to the UK based Scarlet Rooms.  Their customer service, speed of delivery, and ease to work with was bar none one of the best we have dealt with so far.

Ryan:  The Kiiroo Onyx 2 has an idea that could be one of the most amazing experiences a man could have with a sex toy.  Through VR, or through watching a POV (point of view) video, the Onyx 2 actually massages your penis to the exact same movements you see in the video.  For instance, if a girl is stroking a penis in a 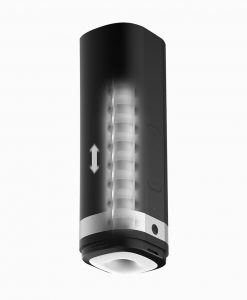 video, the Onyx 2 strokes you in the same rhythm.  If she is sucking fast, it also moves fast.  In the video we viewed, it was two women giving a blow job, and this thing was able to keep up with the video and vibrate to the exact same movements.  Unfortunately the Onyx 2 randomly stopped and we’d have to move it around for it to start vibrating again.  Unsure if this was a connectivity issue, but either way, I’m going to have a hard time orgasming playing Red Light / Green Light with my masturbator!   We had the same problem when we connected the item to the female compatible device, the Pearl 2.  It would randomly disconnect and go quiet for a few seconds, then come back to life by touching the sensitivity slider.  Maybe it has a mechanism that turns itself off if it thinks it isn’t being used?