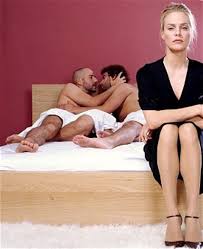 I am a 23 year old female and my boyfriend is a 26 year old “straight” male. We have been dating for 2 years in a pretty sexual relationship. We’ve been open about fantasies, desires etc. before so I thought I knew my partner pretty well. He has consistently referred to himself as a straight man but will sometimes joke that he would ‘love to be bi because there’s more choice’.

He tells me that he has no attraction to men whatsoever, and it’s the acts that involve dicks that are pleasurable to him.  It’s no surprise with guys’ g-spot being up their ass.

I’m trying to be a good girlfriend and just remember that everyone has their own preferences etc. but it’s all become a little much and I’m feeling a little insecure because it seems like he’s not expressing any thoughts in sex with women (e.g. me). I get that he might be feeling more comfortable with me and therefore told me about his fantasies, but I don’t know how to receive this new information.

I don’t want to make a big deal out of it and end up causing tension in the relationship so I’m lost, and don’t know how to deal with this situation.

Venice’s response to dating a bisexual man
You’re right about him feeling comfortable with you by the way he’s expressed his sexual desires with men, especially if you’re both still having sex. I get how it was surprising to hear that he’s had sex with 15 “penises,” but he did say that he has no attraction to men, i.e. having a relationship with them, and was only interested in dicks (transgender, gay, or bisexual men) and the feeling he gets when receiving/giving pleasure to/from them. To me, that seems like a fairly common thing in both men and women who prefer to be in a relationship with the opposite sex, but do have a sexual attraction to the same sex. How you’re describing your boyfriend is exactly how it is for me, because although I love women’s bodies, I don’t want to be in a relationship with a woman.

As for you, this revelation from your boyfriend is all new to you, so yes, it’s going to take some processing and understanding. But if it’s something you can discuss together, empathize, and learn to embrace, this can open up a new sexual world. If he’s not having sex on the side with men and he’s telling you that he still has fantasies about them, not only does he trust you and feel comfortable telling you, but it’s possible that he may to involve you one day.   I am not sure if that is a good thing or a bad thing for you, but that is probably where these discussions will lead.  Dating a Bisexual Man

Ryan’s response to dating a bisexual man
From what I read, it sounds like your boyfriend is bisexual with a lot of gay experiences.  That word gay can really scare a man that identifies as straight.  What’s crazy about the labels we give each other is it can get very confusing. Being bisexual is being attracted to someone of the same sex, as well as the opposite sex.  However, a bisexual experience is being with both genders together in one experience. One on one with the same gender are gay experiences.  So he has a lot of straight experiences with you and other girlfriends, and a lot of gay experiences with other men.  He may be trying to bridge the gap and bring both of his worlds together.  He just needs to find a partner that is open enough to accept this lifestyle.  If you aren’t interested in having sexual relationships with other men, this may be a red flag for you.  Opening this Pandora’s box may lead to him asking you to sleep with other men together, have oral sex together, and share experiences.  If this is something you may be into, you are about to be a lucky girl.  I am not saying this is always the case, but if a man submits himself to another man, sucks on his penis and lets him fuck him, I wouldn’t be surprised if he wanted that same man to also take his girl. He has already given up his own body and let a man use him.  There is a submissive kink going on when a man bottoms for another man.  It’s almost like the act of submitting and giving up his power to another person is what turns him on.  What better way to submit to him by sacrificing his girlfriend to the gay gods.

The fact he doesn’t fantasize about other women is actually a good thing.  Especially because you are so new to this bisexual lifestyle your boyfriend has been living.  It means he is happy with what he has and doesn’t have fantasies about other women and he is satisfied what he gets from his “straight life.”    That may change later if you open the Pandora’s box  and have threesomes with other men.  It may lead to fantasies about trying threesomes with other women and him wanting you to explore your own sexuality.  That’s a whole different realm of thought that I won’t get into.

My suggestion to you is to ask him if he is interested in you pegging him.  If you are open minded enough to hold his legs up and use a strap-on on him, he may enjoy that feeling of submissiveness.  My other suggestion is to sit him down and let him know you are not okay with him going behind his back and having gay experiences.  A lot of boyfriends/husbands live this second lifestyle behind their partners back.  He is obviously being open and honest, but you probably should lay some boundaries and let him know you do consider him being sexual with another person, man or woman, as cheating.  If you are not into an open lifestyle, he will need to understand that being bisexual doesn’t mean he gets a free pass.  Sometimes men think that because it’s another man, it really isn’t cheating.  Be careful, this type of thing can be very complicated.  I do not have enough information to know if you are okay with him creeping on the side, okay with possibly joining him with another man, etc.  So I won’t get into the dos and don’ts. Dating a Bisexual Man