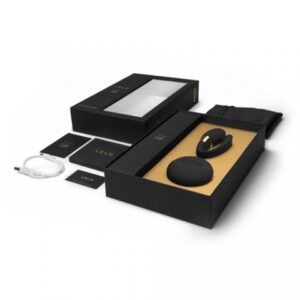 Well, LELO and it’s customer service are bar none, the best we’ve worked with. Their items? The best we’ve played with. The Tiani™ 24K is no exception. Now, the 24K edition of this toy is not yet released (it should be released after this review has been published). It’s absolutely stunning. Truthfully, sex toys really shouldn’t be this beautiful, because it really only takes Ryan and I just a few minutes to get our cum all over them.  But let’s get to the Tiani™.  You’ve probably seen a very popular design that resembles the Tiani™. Yes, I am talking about the We-Vibe, which we personally didn’t have a great experience with. So you’re probably wondering why we would review a toy very similar in design. Because  you should buy the Tiani™ rather than the We-Vibe. Well let me say, We-Vibe had a great idea, with mediocre implementation.  LELO fixed what was my biggest issue with the We-Vibe, comfort. 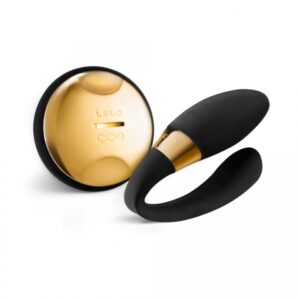 Being familiar with the design meant we needed very little prep time for this review session. I came out of the shower and looked at Ryan already on the bed slowly stroking his semi erect penis. He was already lubed up so we were ready to go. I came over to the bed and grabbed his penis and started stroking it for him. As I would switch hands, I would rub the free hand, now moist with lubrication from Ryan’s dick, on my own vagina to make sure the Tiani™ could easily slide inside me. The only problem? Ryan felt too erect.  Yes, too erect. We have been together for over 17 years and if his dick is too hard, it can be extremely uncomfortable for me. You’d think after all these years my insides would have morphed to match with his penis like a puzzle, but a majority of the time Ryan is at about 85%, where his penis still has flexibility. This slight give in his penis is what feels the most comfortable for me. However, when I orgasm through penetration, it’s usually due to the deep pain and rough sensations I need when I am horny. Sometimes I love the punishment, sometimes I don’t. Tonight, it has me a bit tensed up because I’m not in the mood to have my insides destroyed. I getmy penetration orgasms are always due to the stabbing deep pain. Why does sex have to be so complex? so it has some give while inside my body. When he has his high school erection, it’s like being fucked by a large wooden stick that just destroys my insides no matter how much we lubricate. Not that sex is overrated, but sex with a penis that has no give is extremely overrated for me, especially from certain angles.